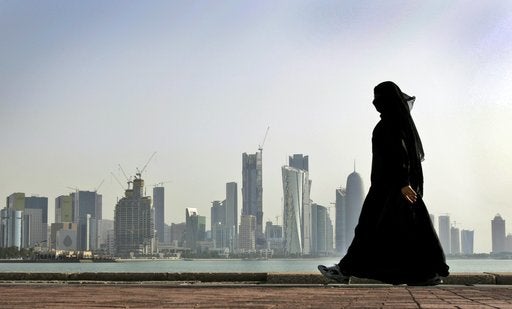 FILE – In this May 14, 2010 file photo, a Qatari woman walks in front of the city skyline in Doha, Qatar. Saudi Arabia and three Arab countries severed ties to Qatar on Monday, June 5, 2017 and moved to cut off land, sea and air routes to the energy-rich nation that is home to a major U.S. military base, accusing it of supporting regional terror groups. (AP Photo/Kamran Jebreili, File)

DUBAI, United Arab Emirates – A senior Emirati official insisted on Wednesday that Gulf Arab states were not seeking regime change in Doha, as tensions built in a bitter feud between Qatar and its neighbors.

Speaking to AFP in Dubai, the United Arab Emirates’ state minister for foreign affairs Anwar Gargash accused Qatar of being “the main champion of extremism and terrorism in the region”.

But he also said measures taken against Qatar this week by Saudi Arabia, the UAE and other Arab nations were not aimed at seeking new leadership in Doha.

“This is not about regime change — this is about change of policy, change of approach,” Gargash said.

Saudi Arabia, Egypt, the UAE and Bahrain announced on Monday they were cutting diplomatic ties and closing air, sea and land links with Qatar, giving Qataris within their borders two weeks to leave.

The four countries have suspended all flights to and from Qatar, pulled their ambassadors from Doha and ordered Qatari diplomats to leave.

Riyadh and its allies accuse Qatar of supporting extremist groups and of serving the interests of regional arch-rival Iran, claims Doha has strongly rejected.

The dispute has sparked the worst diplomatic crisis in the Arab world in years and raised fears it will cause further instability in an already-volatile region.

Kuwait is leading efforts to find a mediated solution. Its Emir Sheikh Sabah al-Ahmad Al-Sabah held talks with Saudi King Salman on Tuesday but there were no immediate signs of progress.

He travelled Wednesday to the United Arab Emirates.

The Kuwaiti ruler played a pivotal role in mediating a compromise in a 2014 diplomatic dispute between Saudi Arabia, Qatar and other Gulf states.

The United States, France and Russia have called for dialogue while Turkey has defended Qatar and said it would further “develop” ties with Doha.

In an apparent sign of support, Turkey’s parliament will debate on Wednesday a bill that would allow deploying troops to a Turkish base in Qatar.

US President Donald Trump waded into the dispute on Tuesday, but seemed to only muddy the waters. After first appearing to back the Saudi-led measures against Qatar on Twitter, he shifted gears and called for unity among Gulf Arab states.

Trump’s Tuesday tweet — in which he said “all reference was pointing to Qatar” as a financer of extremism — was especially surprising given Qatar’s role as host of the largest US airbase in the Middle East.

Al-Udeid, located in the Qatari desert, is home to some 10,000 US troops and is a crucial hub in the fight against Islamic State group extremists in Syria and Iraq.

German Foreign Minister Sigmar Gabriel accused the US president of fanning conflict in the Middle East and risking a “new spiral in arms sales” with his remarks.

“Such a ‘Trumpification’ of relations in a region already susceptible to crises is particularly dangerous,” Gabriel said in an interview scheduled to appear on Wednesday.

Qatar has said it is open to talks to end the crisis but has also accused its neighbors of impinging on its sovereignty.

The UAE meanwhile warned that anyone showing sympathy with Qatar could face jail time or fines.

The UAE attorney general said Wednesday that “any participation in conversation or social media or any other means that demonstrates sympathy to Qatar… may face a prison sentence of three to 15 years and a fine of no less than 500,000 dirhams ($136,000).”

The measures taken against Qatar have seen dozens of flights cancelled and huge problems for Qatar Airways, which has been banned from the airspace of Saudi Arabia and other countries.

The severing of land and maritime links have also sparked fears of food shortages in Qatar, which relies heavily on imports.

Qatar has an independent streak that has often angered its neighbors, attracting criticism for hosting the leaders of the Muslim Brotherhood and Hamas, and supporting Islamist rebels in Syria.

Saudi Arabia and its Gulf allies may have felt emboldened to move against Qatar by Trump’s visit last month to Riyadh, which saw the president clearly align US interests with the kingdom and lash out at Iran.

Riyadh has itself faced accusations of tolerating or even supporting extremists, in particular after the September 11, 2001 attacks in the United States.

Of the 19 hijackers of planes used in the attacks, 15 came from Saudi Arabia, also the birthplace of Al-Qaeda founder and attack mastermind Osama bin Laden.

Read Next
Maute brothers’ pa to be charged with illegal possession of gun, explosive
EDITORS' PICK
Work-From-Home is here to stay and requires reliable logistics
Legarda emphasizes role of ICC/IPs in nation building this IP month
USAID Opportunity 2.0 calls for applicants for grants for out-of-school youth engagement
DOTr to defend proposal to increase passenger capacity in public transport
The crisis within: Suicides rise as COVID takes its toll on lives, livelihood
Pharmally scandal: When middlemen profit even during a pandemic
MOST READ
Bongbong says PH should modernize infrastructure to become Asia’s next logistics hub
PDP-Laban’s Cusi wing inks coalition deal with Reform Party
Robredo on vote buying: That might be taxpayer’s money so accept it, but vote based on conscience
Karen Davila’s son survives second full-blown seizure, now well
Don't miss out on the latest news and information.