Maute brothers’ pa to be charged with illegal possession of gun, explosive 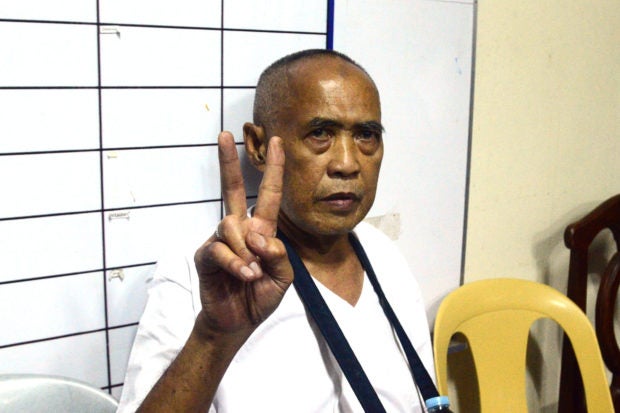 DAVAO CITY -– Authorities are readying charges of illegal possession of a firearm and an explosive against Cayamora Maute, father of the brothers who founded the terror group now fighting government forces in Marawi City.

Brig. Gen. Gilbert Gapay, assistant commander of the Eastern Mindanao Command of the Armed Forces of the Philippines, said a grenade and a .45-pistol were found in the van where the 67-year-old patriarch was riding when apprehended at a checkpoint here on Tuesday morning.

The grenade and gun were discovered hours after the arrest, when the van was already brought inside the Davao City Police Office compound where a thorough check was conducted.

Gapay said starting Tuesday night, the police and the military have been strengthening the security in and out of the Davao City Police Office (DCPO) where the suspects were detained.

The DCPO on Wednesday morning said the suspects “will be transferred by the AFP to an undisclosed detention facility for security purposes.”

Cayamora was included in the list of people to be arrested as ordered by Defense Secretary Delfin Lorenzana, the administrator of the Martial Law in Mindanao that President Duterte declared on May 23, the day fighting between government forces and the Islamic State-inspired terrorists from the Maute Group erupted in Marawi City.

Gapay said the arrest of Cayamora “is a big blow” to the terror group as this would dampen the morale of the brothers.

“All the information we will be getting from Cayamora Maute will be very valuable and instrumental to the complete neutralization of this terror group,” Gapay said.

He said during the “formative years” of the terror group, Cayamora was there to “give direction, guidance and influence to his sons.”

“Maybe that led him to shift into terrorism,” Gapay said.

Mayor Sara Duterte-Carpio, in a statement, said the apprehension of Cayamora was “crucial in the government’s efforts to end the reign of terror experienced in Marawi and the entire Mindanao these days”

“This is an important development in our collective fight to reclaim peace and defeat lawlessness and terrorism, and all that threatens our freedom and future,” the mayor said as she lauded the Task Force Davao and commended Lt. Col. Mondia, the detachment commander, and his team for the apprehension.  SFM