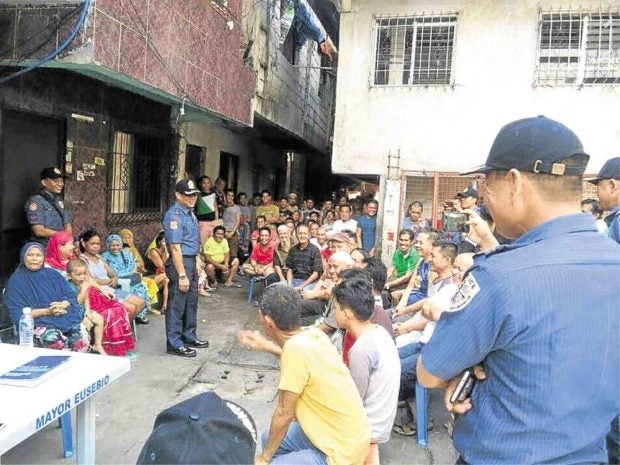 The EPD led by Chief Supt. Romulo Sapitula (center) gathers members of the Muslim community in Barangay Sto. Tomas, Pasig City, for a dialogue on May 29. —Photo courtesy of EPD

The Eastern Police District (EPD) confirmed that at least nine members of the Maute clan hailing from Mindanao are residing in Pasig City.

The EPD director, Chief Supt. Romulo Sapitula, maintained that they were “peace-loving” individuals who may now need protection from “Christian fanatics” in the wake of the violence sowed by the Maute terrorist group in Marawi City.

The Mautes in Pasig mostly earn a living as smalltime traders, like DVD vendors, according to Sapitula, who has been conducting dialogues with local Muslim communities over the past week to gain their cooperation in the fight against terrorism.

“As of now, we have not established that the Maute family members have anything to do with the violence in Marawi City,” Sapitula said in an interview on Tuesday. “I have told PNP chief Director General Ronaldo dela Rosa and our National Capital Region Police Office chief Oscar Albayalde about this, and we did a profiling afterwards also to determine the right kind of protection we can give these families.”

“What I’m looking at here is there might be some Christians who are fanatics who might target them. We also have to protect them. They are peace-loving people,” Sapitula said.

The identification of the Maute clan members was a result of last week’s dialogues, he added. The EPD covers the cities of Pasig, San Juan, Marikina and Mandaluyong.

In those gatherings, he said, Sapitula recalled telling over 300 Muslim residents: “Huwag na kayong dumagdag sa gulo sa Mindanao. (Don’t add to the conflict in Mindanao). I know you left Mindanao because of that. You have embraced your new life in Manila as your new place. Let’s help each other and help solve the conflict by praying for peace.”