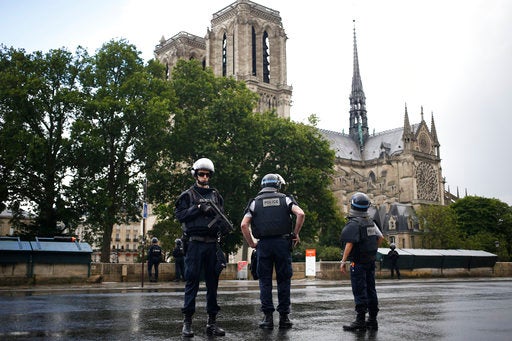 Police officers seal off the access to Notre Dame cathedral in Paris, France, Tuesday, June 6, 2017. Paris police say an unidentified assailant has attacked a police officer near the Notre Dame Cathedral, and the officer then shot and wounded the attacker. (AP Photo/Matthieu Alexandre)

PARIS  — Paris police say an operation around Notre Dame Cathedral is over, after an attacker who targeted police with a hammer was shot and injured.

Police spokeswoman Johanna Primevert tells The Associated Press that the intervention is over. She did not provide further details.

Another police official said the attacker surged at police patrolling the scene with a hammer.

Paris police tweeted that one officer was wounded in the attack.

Hundreds of people on the esplanade in front of Notre Dame were evacuated while the operation was under way.