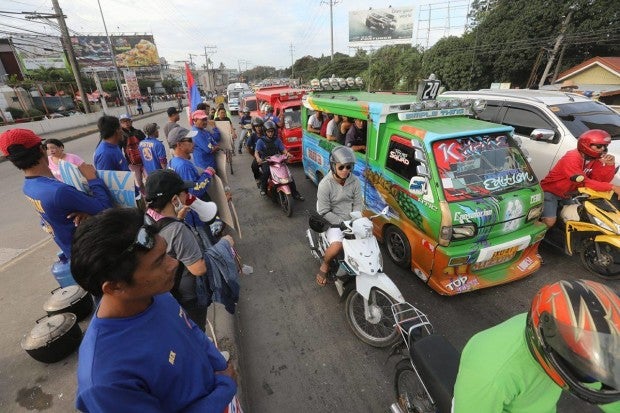 ILOILO CITY — Public transport remained paralyzed in most of Western Visayas for the second straight day due to a strike spearheaded by jeepney operators against the phaseout of public utility vehicles (PUVs) at least 15 years old.

In Iloilo City, private vehicles were usually the ones seen running on the streets along with government vehicles offering free rides to employees and other commuters. Only a few passenger jeepneys and taxi units continued plying their routes.

The city government reported that at least 5,412 commuters availed of free rides offered by government-owned vehicles deployed on Monday, the first day of the strike.

Forty-eight vehicles of the city government, Philippine National Police, Armed Forces of the Phiippines and other agencies were deployed in passenger terminals and other pick-up points to ferry employees and other commuters.

The provincial government also deployed vehicles to several town centers to pick up employees of the provincial capitol and commuters.

Public transport was also mostly paralyzed for the second straight day in the provinces of Aklan, Capiz, Guimaras and Antique.

Classes were suspended in several schools in Antique in the elementary and high school levels while in Guimaras, only motorcycles and tricycles ferried passengers.

Several tricycles continued their trips in the capital town of Kalibo in Aklan but public transportation between Kalibo and the other towns of the province was mostly paralyzed.

The strike also affected at least 90 percent of public transport in Capiz.

“Drivers and operators sacrificed their livelihood for two days to hold the strike. We hope our protest action will compel the national government to shelve the phaseout of the PUVs and instead embark on a rehabilitation plan that will help and not kill the livelihood of small PUV operators and drivers,” said Edgar Salarda, spokesperson of the Pinagkaisang Samahan ng mga Tsuper at Opereytor Nationwide in Panay.  SFM