It was an audacious plot sketched out in chilling detail with blue pens on the back of a paper calendar: Islamic militants in the Philippines, including one of the world’s most-wanted militant leaders, would take over a key central Mindanao city in their boldest attack to date.

With unsettling calm, the terrorist leaders spoke of taking hostages from a school, sealing off roads and capturing a highway “so the people will get scared.”

Video footage and a separate screen-grab image of that secret meeting, obtained exclusively by The Associated Press (AP), offer a rare glimpse into the clandestine operations of the terrorists who followed through two weeks ago with an unprecedented assault on the lakeside city of Marawi, parts of which they still occupy today.

The images also provide the first visual proof that a nascent alliance of local Islamist fighters are not only aligned with the Islamic State (IS) group, but coordinating and executing complex attacks together.

Among those at the table is the purported leader of the IS branch in Southeast Asia, Isnilon Hapilon, who is on Washington’s list of most-wanted terrorists and has a $5-million bounty on his head.

The footage is believed to be the first of Hapilon since he and several other Filipino militants pledged allegiance to IS in 2014. The military had said Hapilon was wounded in a January airstrike.

In the video, however, there are no indications that Hapilon is injured. He appears sitting with other militants at a table, wearing a yellow and black headscarf with a pistol beside his folded arms.

The Armed Forces of the Philippines chief of staff, Gen. Eduardo Año, confirmed the identities of those present, including Hapilon, who resembled other images said to be of him, such as those on FBI wanted posters.

The images show that the insurgent alliance “has this intention of not only rebellion, but actually dismembering a portion of Philippine territory by occupying the whole of Marawi City and establishing their own Islamic state or government,” Año said.

The military has an interest in allowing AP to make the footage public. On Monday, seven lawmakers petitioned the Supreme Court to nullify President Duterte’s imposition of martial law in Mindanao—
homeland of minority Muslims in the largely Roman Catholic country—casting doubt on the gravity of the crisis there.

Año said the reality that “a full-blown rebellion” was underway should convince skeptics that this was not just “a small problem.”

Government troops discovered the video on a cell phone they seized during a May 23 raid on a Marawi safe house where Hapilon and other militants were believed to be hiding.

The military said the video had been filmed a day or two earlier. It was not possible to independently verify that claim.

But a separate screen grab of the same meeting, obtained by AP from an antiterrorism agent, showed a calendar the militants were writing on that was dated 2017.

An Army official allowed AP to record the video as it played on a laptop computer.

Año said the insurgents had been planning to attack Marawi on May 26, the start of Ramadan in Mindanao. But the raid cut their preparations short and triggered instant clashes.

Had the assault not been preempted, the militants likely would have seized more territory and inflicted far more damage.

As it stands, the fighting has been unprecedented. While militants have launched major attacks before, never before has any Islamist group occupied territory in the heartland of the Philippines’ Islamic faith for this long.

Two weeks after the conflict began, at least 180 people have been killed, and the Army is still battling to regain control of Marawi with airstrikes and artillery.

The militants, who are believed to be holding a Catholic priest and many other hostages, have torched buildings and destroyed at least one church.

Año said the terrorists had occupied 10 percent of the city and had positioned snipers in tall buildings. Much of the city center has been devastated. 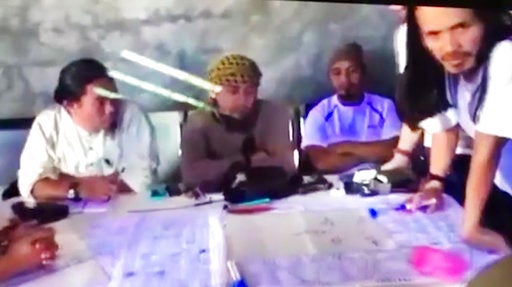 This image taken from undated video shown to The Associated Press by the Philippine military shows the purported leader of the Islamic State group Southeast Asia branch, Isnilon Hapilon, center, at a meeting of militants at an undisclosed location. The images offer a rare glimpse into the clandestine operations of insurgents who followed through two weeks ago with an unprecedented assault on the lakeside city of Marawi, parts of which they still occupy today. (Philippines Military via AP)

The crisis in Marawi, combined with fears that IS is breathing new life into Muslim insurgencies in Southeast Asia, has put the Philippines and the region on edge.

On Friday, when a masked gunman began shooting and burning gambling tables at the Resorts World Manila casino in Pasay City, terrified patrons immediately assumed an IS siege was underway.

The radical group claimed responsibility for the attack, in which dozens of people died of smoke inhalation, but there had been no evidence to back that claim.

Police insist the motive was robbery, and the gunman’s family says he was a disgruntled gambling addict.

Still, the episode highlighted what Speaker Pantaleon Alvarez described as the “unsettling inadequacy” of public security in Metro Manila. The attack, he said, should “serve as a wake-up call” to do something about it.

A three-day security conference this past weekend in Singapore attended by defense ministers and experts from 39 nations produced a flurry of alarmed statements.

Among the topics: a fear that places like Marawi City could become a new base for the IS group as it loses territory in the Middle East.

“If the situation in Marawi in southern Philippines is allowed to escalate or entrench, it would pose decades of problems,” Singapore Defense Minister Ng Eng Hen said.

“All of us recognize that if not addressed adequately, it can prove a pulling ground for would-be jihadists,” he added.

The southern Philippines already is.

Of the 120 militants killed in Marawi so far, at least eight are known to be foreign fighters, including a Chechen, a Yemeni and several Malaysians and Indonesians, according to Defense Secretary Delfin Lorenzana.

Hapilon’s pledge of allegiance, meanwhile, may have already paid off. His faction has received a “couple of million dollars” from IS, Lorenzana said.

In the two-minute video clip obtained by AP, a long-haired man identified by the military as Abdullah Maute addresses other militant leaders gathered around a white plastic table.

Pointing to a crude sketch of Marawi’s main streets and speaking in Tagalog and Marawi’s Maranao dialect, Maute declares, “We’ll take this first and then here.”

“Or,” he says, “we can go here first. We seal this off so you’ll have a passageway. But we need to capture a highway so the people will get scared.” Another militant can be seen videotaping the clandestine meeting.

Maute is the leader of a militant group called IS Ranao
—one of about 10 small armed groups that have also pledged allegiance to IS and have forged a loose alliance that now flies IS-style black flags.

Although virtually unheard of a few years ago, IS Ranao contributed over 260 of the fighters who attacked mosque-studded Marawi, according to the military.

Along with Hapilon’s group, IS Ranao has been blamed for a night-market bombing in September last year that killed 15 people in Davao City, Mr. Duterte’s hometown.

Also appearing in the video clip are two of Maute’s brothers—Omarkhayam and Maddi
—and another militant known as Abu Humam.

Humam is a member of Khilafah Islamiyah Mindanao, a small group linked to a 2013 bombing that killed eight people at a bar in Cagayan de Oro City, not far from Marawi.

The new armed groups are the latest offshoots of a decades-long Moro separatist conflict fueled by wrenching poverty, weak law enforcement and a surfeit of weapons in Mindanao.

The two biggest Moro rebel groups, which have engaged in peace talks with the government, have not backed the militants who attacked Marawi and offered to help bring the siege to an end.

Hapilon’s militant alliance aims to establish a “wilayat,” or a provincial territory, which will form part of a caliphate in Southeast Asia, according to experts.

Mr. Duterte has said government forces will never allow them to do that or break away from the Philippines.

Read Next
Paris police operation near Notre Dame over
EDITORS' PICK
QC gov’t to give free COVID-19 antigen test to residents on January 19
DOH: 28,471 new COVID-19 cases in PH; active cases now 284,458
Acer starts the year off strong with the Aspire Vero National Geographic Edition
Over 3 Million worth of prizes to be won at Smart Padala’s SENDali Manalo Promo!
WHO urges manufacturers to provide COVID-19 vaccine data
Gear up and get ready to play with Yamaha Mio Gear
MOST READ
Cold-case investigation names surprise suspect in Anne Frank’s betrayal
On Day 2 of implementation, gov’t says workers now exempt from ‘no vax, no ride’ policy
Guevarra to Acosta: Obey rules on unvaccinated
Czech anti-vax singer dies after deliberate infection
Don't miss out on the latest news and information.