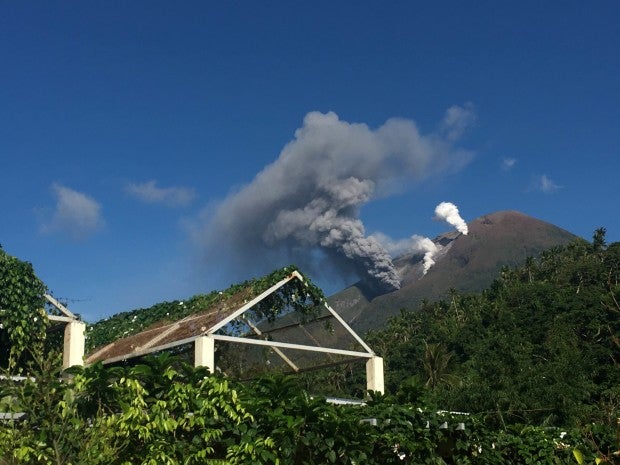 An example of a phreatic explosion at Mt. Bulusanon on Oct. 17, 2016. The latest happened on the night of June 5, 2017, says Phivolcs.  (CONTRIBUTED PHOTO/Andrew Joseph B. Z)

April Dominguiano, resident volcanologist in Sorsogon Phivolcs station,said in a phone interview said that the phreatic eruption that transpired around 10:29 p.m. was minor.

“There’s a weak to moderate emission of white steam plumes and it reached about 50 meters before drifting North West direction originating and coming from active vents,” she said.

“There were traces of ash in Monbon and Cogon villages in Irosin town,” she added.

Dominguiano said a sulfuric odor was also noted in the village of Bolos, also in Irosin, and rumbling sound was observed in Barangays Monbon and Cogon. For the past 24 hours, Phivolcs seismic instrument have recorded three volcanic quakes around Mt. Bulusan.

Mt. Bulusan remains at Alert level 1 (Low Level of Volcanic Unrest) which means there is “slight increase in volcanic earthquake and steam/gas activity, sporadic explosions from existing or new vents, notable increase in the temperature of hot springs and slight inflation or swelling of the edifice” of the volcano, according to Phivolcs website. Phivolcs also said on its website that there might be “hydrothermal, magmatic, or tectonic disturbances.”

“The source of activity is shallow, near crater or in the vicinity of Irosin Caldera. Entry into the PDZ must be prohibited,” Phivolcs added.  SFM/rga