Napoles insists on transfer to NBI 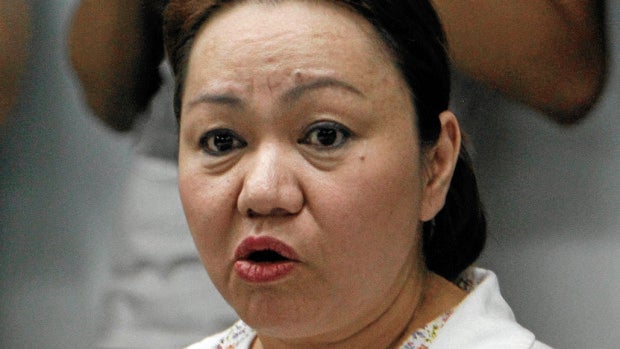 Suspected pork barrel scam mastermind Janet Lim-Napoles has insisted on her plea to be transferred to the National Bureau of Investigation facility.

This time, Napoles’ lawyers filed the motion in connection with the case of former Association of Philippine Electric Cooperatives Rep. Edgar Valdez.

The said case is being handled by the Fifth Division—the same court which on May 18 chose to follow the May 15 decision by two other divisions to detain her at the Bureau of Jail Management and Penology facility in Camp Bagong Diwa, Taguig City.

In her four-page motion dated June 1, Napoles’ camp repeated its claim that her life was at risk due to favorable developments in the pork barrel scam cases.

This was after the Duterte administration expressed openness to turn her into a state witness to pin down officials of the previous Aquino administration.

Napoles insisted that she was “bombarded with  death threats almost everyday to the point that her personal belongings were ransacked.” She said the NBI custodial center in Manila would give her a “secured and more restricted” place of detention.

The Office of the Ombudsman’s prosecution panel, however, filed a separate four-page motion seeking for the reiteration of Napoles’ commitment at the BJMP facility.

Prior to her April 2015 conviction for the illegal detention of pork scam whistleblower Benhur Luy, Napoles was detained at the BJMP facility pending trial for the nonbailable plunder charges. The Makati City Regional Trial Court later sentenced her to up to 40 years’ imprisonment at the Correctional Institute for Women.

The Court of Appeals’ May 5 decision to reverse Napoles’ conviction, partly thanks to a show of support by the Office of the Solicitor General, sparked this dispute on where Napoles should be detained.

On May 15, the Sandiganbayan First and Third Divisions, which handle the plunder cases of former Senators Ramon “Bong” Revilla Jr. and Juan Ponce Enrile, denied Napoles’ request and ordered her detention at the BJMP facility.

The two court divisions found no evidence to back up Napoles’ claim of threats to her life and a reduced risk at the NBI facility. The court also held that custody of detained litigants normally lies with the BJMP.

The Fifth Division, tackling the plunder case of former Senator Jose “Jinggoy” Estrada, was actually the first to hear the matter on May 12, but it directed the prosecution to submit its comment instead of resolving it right away.

Overtaken by events, the said court opted to follow the moves of the other divisions. “Considering that the First and Third Divisions of this court had already ordered the issuance of commitment orders … for the same reasons cited by the said Divisions, let a similar commitment order be issued in these cases,” it said on May 18.