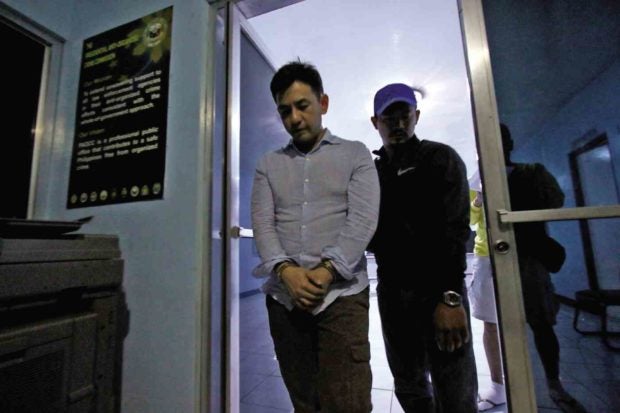 Back to jail for Korean-American Jun No, alias Jazz, who was first taken into police custody in this April 6 file photo.—RICHARD A. REYES

A Korean-American fugitive who escaped from police custody while recovering from surgery at a Quezon City hospital was recaptured on Thursday after more than a month on the run.

The National Bureau of Investigation presented Jun No following his arrest by agents of the NBI Task Force Against Illegal Drugs, who found him in a computer shop in Zamboanga City

Authorities launched a manhunt for No, also known as Jazz, after giving his two police escorts the slip at East Avenue Medical Center (EAMC) on April 15, five days after his operation for acute appendicitis.

He was supposedly guarded at the EAMC by SPO2 Michael Macarubbo and PO1 Ernie Eugenio. An investigation revealed that No, who was not handcuffed to his bed, was able to leave the hospital’s Ward 1 after Macarubbo went out to have breakfast and Eugenio fell asleep.

While under hospital arrest, a female companion identified as Darlene Son, or Seo Yang, reportedly gave No P3,000 in cash before he fled.

No was first arrested on April 5 in an entrapment operation in Pasay City, where he was caught allegedly selling 140 tablets of ecstasy worth P420,000. Police said No was a party drug supplier operating in Malate, Manila.
Walking calmly

Presented to reporters at the NBI headquarters on Friday, No broke down in tears, claiming he escaped because he just wanted to visit his sickly mother.

Footage from closed-circuit television cameras in the hospital showed No calmly walking past security guards, with a piece of cloth wrapped around his right wrist, apparently to hide his handcuffs. He was seen walking past the main cashier, then the waiting area, before reaching the lobby.

Upon stepping out of the hospital, No got into a bus going to Fairview, according to NBI Director Dante Gierran.

He later hid in different condominiums in Manila, Parañaque and Makati from April 18 to 22, then flew to Cebu City via Philippine Airlines, where he stayed for nearly a month, from April 29 to May 26.

He checked into different hotels, spending time with other drug users and sex workers whom he knew prior to his arrest.

From Cebu, No flew to Zamboanga City using a fake ID and a passport under the name Choi Minsoo. He was allegedly planning to board a sea vessel to reach Tawi-Tawi, and then take a “backdoor” exit to Malaysia, the NBI official added.

Gierran said No did not resist arrest when cornered at a computer shop at Barangay Tetuan, where he was checking “money coming in from his family.”

Read Next
Fire razes Customs warehouse in Port Area
EDITORS' PICK
In Borongan, nuns play hoops (not mahjong)
PH resumes talks with China on Chinese-funded transport projects
Powered by style, innovation and passion
Why Tagle is a leading papal contender
House energy committee chair Arroyo bats for cheap electricity
A laptop that maximizes your WiFi so you can maximize your productivity
MOST READ
Imee Marcos bares illegal importation of white onions
Why Tagle is a leading papal contender
Vico Sotto undergoes procedure for knees
Ogie Alcasid positive for COVID-19: ‘We keep ourselves protected and yet inabot din’
Don't miss out on the latest news and information.