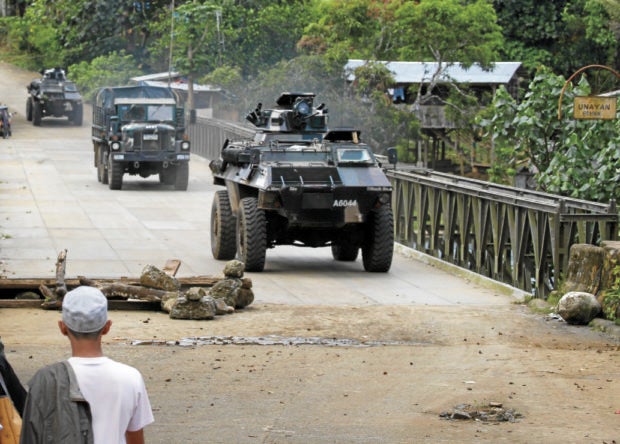 Government troops cross a bridge after securing a village outside Marawi City, Tuesday, May 30, 2017. Muslim militants who attacked Marawi last week attempted to blow the bridge but was thwarted by villagers. Philippine forces pressed their offensive to drive out militants linked to the Islamic State group after days of fighting left corpses in the streets and hundreds of civilians begging for rescue from a besieged southern city of Marawi. (Photo by BULLIT MARQUEZ / AP)

“Based on the report that we’re getting I don’t think we can meet that deadline today to completely – I’d like to qualify that – to completely free Marawi of every single armed element in every street,” Brig. Gen. Restituto Padilla, spokesperson of the Armed Forces of the Philippines (AFP), said in a media briefing on Friday.

The ongoing military offensives against the terrorists holed up in the city has reached its 11th day.

“So until such time that every member of this armed group, this rebellious group that still wants to make a stand inside Marawi exists, we cannot totally say we have cleared Marawi,” Padilla said, adding they were doing their best to accomplish the mission immediately.

Thousands have fled from Marawi since then. While the military has cleared most parts of the city, it has yet to take control of the terrorists’ stronghold at the center.

“The enemy continues to occupy commercial buildings as their defensible enemy lairs and this is the subject of military action being conducted from the past few days until now,” Padilla said.

Hapilon was still in the city, according to the reports reaching the AFP, Padilla said.

As of 6 p.m. Thursday, 36 combatants on the government side, some of them police officers, and 120 terrorists had been killed in Marawi. The civiian death toll remained at 19. /atm