Clash fuels fear of is foothold in Mindanao 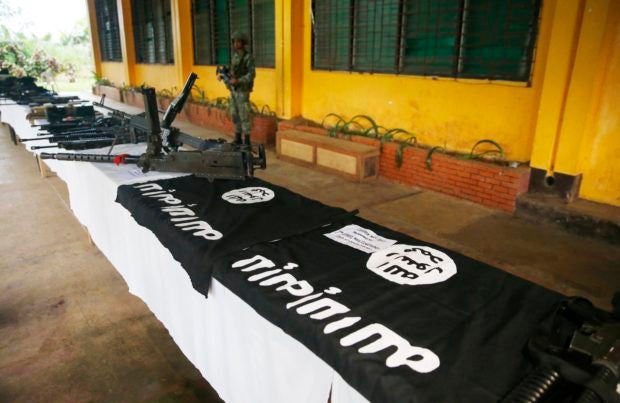 A Philippine Marine guards the display of high-powered firearms, ammunitions, uniforms and black ISIS-style flags which were recovered from Muslim militants Tuesday, May 30, 2017 in Marawi city southern Philippines. Philippine forces pressed their offensive to drive out militants linked to the Islamic State group after days of fighting left corpses in the streets and hundreds of civilians begging for rescue from a besieged southern city of Marawi.(AP Photo/Bullit Marquez)

MARAWI CITY – Terrorists who have laid siege to this predominantly Muslim city had been planning a spate of attacks during the holy month of Ramadan to earn recognition as a regional branch of the Islamic State (IS) group, the military said on Tuesday.

Soldiers have taken control of about 70 percent of Marawi, where gunmen from the Maute group have been fending off the Army for a week, according to Armed Forces Chief of Staff Gen. Eduardo Año.

“They wanted to show the world that there is an IS branch here which can inflict the kind of violence that has been seen in Syria and Iraq,” Año told The Associated Press (AP).

The violence followed an unsuccessful Army raid that attempted to capture Abu Sayyaf commander Isnilon Hapilon, who has pledged allegiance to IS.

Hapilon escaped and gunmen loyal to him besieged this mostly Muslim city of 200,000 people, torching buildings and taking hostages.

Año said the gunmen were prepared to fight because of their Ramadan attack plot.

Over the past week, the fighters have shown their muscle, withstanding a sustained assault by the military and increasing fears that the IS violent ideology is gaining a foothold in the Philippines’ restive southern islands, where a Moro separatist rebellion has raged for decades.

The Army insists the drawn-out fight is not a true sign of the terrorists’ strength, and that the military has held back to spare civilians’ lives.

“They are weak,” Ano said, referring to the gunmen, speaking at a hospital where injured soldiers were being treated. “It’s just a matter of time for us to clear them from all their hiding places.”

As of Tuesday morning, Año said the military, working house-by-house, had cleared 70 percent of the city and the remaining gunmen were isolated.

Still, the terrorists have turned out to be remarkably well-armed and resilient.

In recent years, small militant groups in the Philippines, Indonesia and Malaysia have begun unifying under the banner of IS.

Solicitor General Jose Calida said last week that the violence in Mindanao was “no longer a rebellion of Filipino citizens.”

Three Malaysians, an Indonesian and possibly Arab extremists have been killed in the Marawi fighting, Año said, citing the latest intelligence on the matter.

He said Hapilon was still hiding somewhere in the city and that authorities were working to confirm another top militant had been killed.

Rohan Gunaratna, a terrorism expert at Singapore’s S. Rarajatnam School of International Studies, said the fighting in Marawi, along with smaller battles elsewhere in the southern Philippines, may be precursors to declaring a province, which would be “a huge success for the terrorists.”

While Indonesia has been fighting local terrorists since 2002, the rise of IS has breathed new life into those militant networks and raised concern about the risk of Indonesian fighters returning home from the Middle East.

Experts have warned that as IS is weakened in Syria and Iraq, battered by years of American-led attacks, Mindanao could become a focal point for regional fighters.

Southeast Asian fighters fleeing the Middle East “could look to Mindanao to provide temporary refuge as they work their way home,” said a report late last year by the Jakarta-based Institute for Policy Analysis of Conflict, predicting a high risk of regional violence.

Marawi is regarded as the heartland of the Islamic faith in Mindanao.

Año said the extremists had plotted to set Marawi ablaze entirely to project IS influence.

The extremists wanted to kill Christians in nearby Iligan City on Ramadan, the Muslim holy month of fasting, to mimic the violence seen by the world in Syria and Iraq, Año said.

The gunmen’s support network in Marawi remains unclear, though the power of one militant group—the Mautes—has grown in recent years.

Led by members of the city’s Maute clan, the group has become increasingly active in a number of towns across Lanao del Sur province, where Marawi is located, and has been instrumental in the fighting this past week.

Moro rebels have been waging a separatist rebellion in Mindanao for decades.

The Moro National Liberation Front, formerly the largest armed group in Mindanao, dropped its secessionist demands in 1996, when it signed a Muslim autonomy deal with the government.

Amid continuing poverty and other social ills, restiveness among minority Muslims has continued. —AP