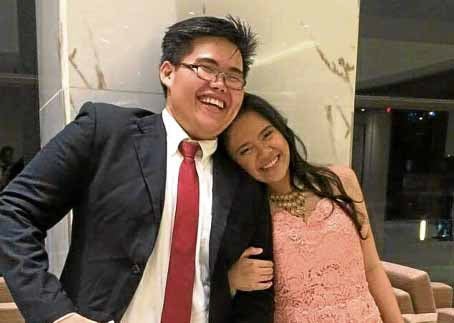 CEBU CITY—Two cousins shared the same dream of topping the certified public accountant (CPA) licensure exams, and they did just that.

Vianca Pearl Inot Amores and Marianito Jesus Berdin del Rio, who both graduated from the University of San Carlos (USC), shared the top spot in the May 2017 CPA licensure exams, with an average of 92.67 percent.

There were 3,389 examinees out of 9,645 who passed the exams held in the cities of Manila, Baguio, Cagayan de Oro, Cebu, Davao, Iloilo, Legazpi and Tacloban.

“I am so happy that God granted my wish. I have been praying for this,” Amores said.

“I can say the Lord is amazing. My cousin and I were destined for this and there is no such thing as impossible,” Del Rio said.

Seven other graduates from Cebu are also in the Top 10—four from USC and three from the University of San Jose-Recoletos (USJ-R).

Those from USJ-R were Harold Pacaña, sixth, with 91 percent; and Marie Claire Cortes and Jessele Ann Echavez, seventh, 90.67 percent.

Amores said she and Del Rio helped each other during the review. The two are second cousins; their fathers—Lapu-Lapu City Councilor Ricardo Amores and Mariano del Rio—are first cousins.

Amores is the second of three children of Ricardo and Vilma, who works in a cargo company. Del Rio is the youngest of five children of Mariano and Zenaida.

Amores said she shared her knowledge about taxation and law with Del Rio because these were her forte. Del Rio helped Amores with math and auditing.

Aside from her family, she was inspired to top the exam by her boyfriend, Ervin Michael Cavalida, who placed fifth in last year’s CPA exams.

“Study hard and don’t forget to pray,” Amores said when asked about the secrets to her success. During her 9 a.m.-to-midnight review, Amores said she followed a schedule—45 minutes for review and 15 minutes break.

Before taking the test, she went on a novena to the Holy Spirit and visited St. Joseph Church in Lapu-Lapu, Birhen Sa Simala Shrine in Sibonga town, and the tomb of Archbishop Teofilo Camomot in Carcar City.

Del Rio, 20, said he too followed the review technique of Amores.

Like her, the first choice of Del Rio was not accountancy, but engineering. Amores wanted to take up culinary arts.

Both followed the advice of their fathers to take up accountancy. And they will both be working with the country’s top auditing firm—SGV and Co.

In the case of another placer in the Top 10, taking the licensure exams was meant to fulfill the dreams of her parents, who were not able to pass the CPA exams.