House votes to convene itself into committee of the whole 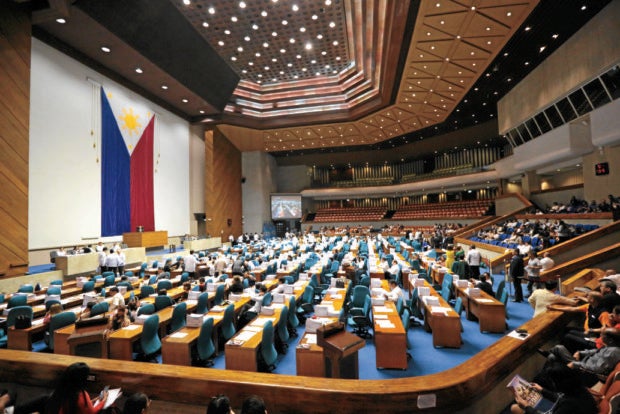 Legislators at the House of Representatives attends the session on Monday, May 29, 2017 as Majority Floor Leader Rodolfo Farinas is scheduled to introduce Committee of the Whole on Martial Law in preparation for Wednesday deliberations. INQUIRER PHOTO / GRIG C. MONTEGRANDE

The House of Representatives on Monday night convened itself into a committee of the whole to consider President Duterte’s martial law declaration in Mindanao, with a briefing from the executive department set for Wednesday at 9 a.m.

Albay Rep. Edcel Lagman of the independent minority bloc opposed the move of Majority Leader Rodolfo Fariñas for the House to convene into a committee of the whole, arguing that Congress, as mandated by the Constitution, should instead hold a joint session with the Senate.

Lagman and ACT Teachers Rep. Antonio Tinio objected to Fariñas’ motion that the discussion of the President’s report be done in executive session.

Fariñas later amended his motion and said the executive session would be conducted when the “testimonies become delicate … then we will exclude [others] if it involves national security.”

Deputy Speaker Fredenil Castro said Lagman and Tinio had been given the chance to express their stand, and with that, divided the House into vote via viva voce.

It was easy for the supermajority to win over lawmakers who voted “nay” to the convening of the House committee of the whole.

Fariñas, who will chair Wednesday’s deliberations, emphasized the need for some parts of the discussion to be held behind closed doors because “we will be listening to the commanders on the ground, we will be briefed where the enemies are, what their plans of action are.”

“You cannot announce that to the public,” he said.

The House will meet as the committee of the whole on Wednesday morning and then close the first regular session in the afternoon.

In the Senate, the minority bloc rushed to have the chamber consider a resolution it filed on Monday that sought to convene a joint session of Congress to tackle the martial law proclamation.

The resolution was filed on Monday, ahead of a briefing—led by Defense Secretary Delfin Lorenzana and National Security Adviser Hermogenes Esperon—on the President’s action in Mindanao.

After the briefing, Esperon said most of the senators appeared to be convinced that President Duterte declared martial law in Mindanao to protect the people and government projects on the island.

“I would like to think they were supportive and appreciative of what soldiers were doing in the field,” Esperon said.

Senators JV Ejercito, Manny Pacquiao and Sherwin Gatchalian said they were inclined to support the declaration of martial law.