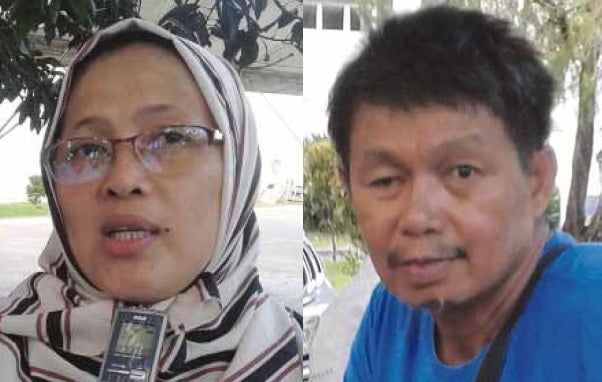 COTABATO CITY—A Maranao housewife said she had “eye-to-eye” contact with at least three of the terrorists who attacked Marawi City as she and her children fled on foot to the next town in Lanao del Sur.

“They were not from Marawi. They looked like Arabs, handsome, fair-skinned, pointed nose. But they did not talk. They just gave us a sharp look and signaled us to move on,” said Amalia Kasim, 45, a housewife and resident of Luksadatu, Barangay Basak Malutlut, in Marawi City.

Kasim said she was returning home from the market at about 2:30 p.m. on Tuesday and was nearing her house when fighting broke out between government forces and the terrorists.

She said her husband, Elias, was not home when the fighting started.

As her neighbors were fleeing, she decided to leave, too.

Carrying valuables and her three children, aged 5, 10 and 12, she headed for Saguiaran town, just outside the city.

“I could not find my husband, his cell phone was out of reach. We proceeded anyway together with our neighbors,” she said, adding she had experienced evacuation in the past but “this is the most horrifying.”

“I cried; my children cried, too, looking for their father. I thought he was already dead but I saw him on Thursday morning in Saguiaran driving our old car,” she said.

Elias, in a separate interview, said he went to a police outpost at 4 p.m. on Tuesday to report that his family was missing.

“When I was in the detachment, gunfire erupted anew so I ducked and took cover. The police told me to stay put,” he said.

“I witnessed the firefight near the police outpost. The police kept firing their guns as I was on the ground but I heard the Maute yelling ‘Allahu akbar (God is great),’” Elias recalled.

Overnight on Tuesday and the whole day on Wednesday, “I was in the police outpost, most of the time flat on the ground as the fighting continued … It was like New Year’s Eve, nonstop firing of guns,” he said.

When soldiers entered the city, he said he braved the streets and drove toward Saguiaran and was reunited with his family.

The couple and their children are now in a relative’s home in Cotabato City. They receive food assistance from the government of the Autonomous Region in Muslim Mindanao.

Read Next
House votes to convene itself into committee of the whole
EDITORS' PICK
House energy committee chair Arroyo bats for cheap electricity
Guarding Sara: Why next VP is getting own security team
WHO says monkeypox is not yet a health emergency
Metro Manila logged most number of new COVID-19 cases — OCTA Research
A massive highway complex makes living in the South highly attractive
Beyond the Chocolate Hills: A farm-to-table, heritage culinary adventure of Bohol
MOST READ
Leon Barretto steps up for sisters, asks dad Dennis Padilla: ‘Please stop resorting to public shaming’
LOOK: Rita Daniela pregnant with first child
Marjorie Barretto to speak up on Dennis Padilla, kids’ relationship ‘in time’
Bea Alonzo, under lie detector test, says she wants prenup agreement with future husband
Don't miss out on the latest news and information.