Martial law in Mindanao: What we know 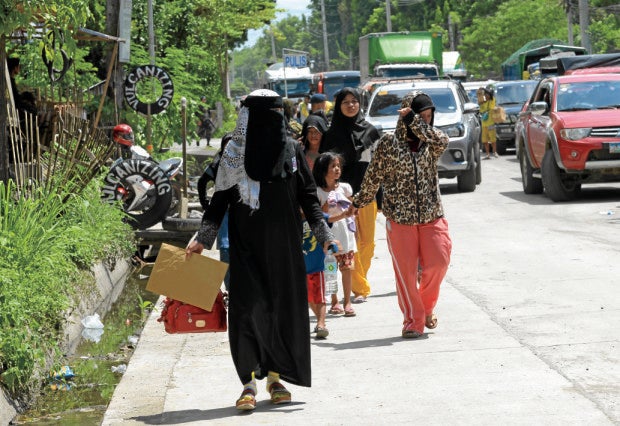 Philippine policemen check evacuees from Marawi aboard a van at a checkpoint by the entrance of Iligan City, in southern island of Mindanao on May 24, 2017.Philippine President Rodrigo Duterte warned that martial law would be “harsh” and like a dictatorship, after imposing military rule in the south of the country to combat Islamist militants. AFP

Philippine President Rodrigo Duterte has imposed martial law in Mindanao to combat militants who have declared allegiance to the Islamic State group.

Here is what we know about why he declared martial law and what happens next:

What happened to trigger martial law?

Duterte acted after security forces on Tuesday battled dozens of gunmen in Marawi, a city of about 200,000 people. One policeman and two soldiers died in the fighting, authorities said.

Tuesday’s violence was the latest in a series of deadly clashes with militants who have pledged allegiance to the Islamic State (IS) group, and are based throughout Mindanao.

Duterte’s declaration fulfilled an often-repeated promise to impose martial law to combat the IS-linked militants, whom he has said are a growing threat to national security.

But he has said many times that martial law may be needed to solve many other problems, including illegal drugs.

Who are the militants?

Authorities said they were battling members of two of the best-known groups to have declared allegiance to IS, the Abu Sayyaf and Maute organizations.

The military said it was hunting Isnilon Hapilon, an Abu Sayyaf leader who has been named the Philippine head of IS. The US government is offering a $5-million bounty for his capture.

READ: Soldier killed, 8 others wounded in clashes with Abus, Maute in Marawi

The Abu Sayyaf is infamous for kidnapping foreigners and killing them if ransoms are not paid. It is also blamed for the nation’s worst terror attacks, including the 2004 bombing of a ferry in Manila Bay that claimed more than 100 lives.

The Jakarta-based Institute for Policy Analysis of Conflict said last year that deepening cooperation among the Maute gang, the Abu Sayyaf and other pro-IS groups meant more deadly violence was “a matter of when, not if”.

Duterte had repeatedly said the growing influence of Islamic State was one of the nation’s top security concerns, and martial law was necessary to stop it.

However Islamist militancy is not new to the southern Philippines, where a decades-long Muslim separatist insurgency claimed more than 120,000 lives.

Muslim rebels orchestrated a siege in the southern city of Zamboanga in 2013 that left more than 200 people dead, but the government of then-president Benigno Aquino did not declare martial law.

Aquino also said he had considered imposing martial law just before standing down last year in Sulu, island strongholds of the Abu Sayyaf in the far south of Mindanao.

But Aquino said he decided against it partly because military rule could spark resentment among local people.

What will happen under martial law?

Martial law allows the president to “call out the armed forces to prevent or suppress lawless violence, invasion or rebellion”, according to the constitution.

Defense Secretary Delfin Lorenzana said security forces would be able to arrest suspected militants and hold them for three days without charge.

Critics fear martial law will give security forces cover to carry out human rights abuses, citing the experience under dictator Ferdinand Marcos a generation ago.

During the nine years of martial law under Marcos, police and troops tortured, abducted and killed thousands of people who were critical of the dictatorship, according to rights groups and historians.

Duterte said Wednesday his version of martial law would be “harsh” and similar to that under Marcos.

The constitution limits martial law to 60 days unless congress agrees to extend it. Duterte warned Wednesday it could last for a year.

The post-Marcos constitution imposed safeguards on martial law, including the requirement for congress to approve its imposition and extension. The Supreme Court can also rule on its legality.

However Duterte said in January he would ignore the constitutional safeguards if necessary, and may impose martial law across the nation.

“I don’t care about the Supreme Court… because the right to preserve one’s life and my nation, my country transcends everything else,” he said.