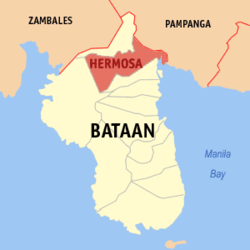 HERMOSA, Bataan — A person of interest in the murder of a town official was arrested on Tuesday (May 23) for illegal gun possession, police said.

The house of Enrico Cabiling, Jr., 36, Barangay (village) Mambog chairman, was raided by a team from the Bataan police and the Police Criminal Investigation and Detection Group. The police seized 11 different weapons and ammunition, as well as a grenade.

The police are also seeking out Cabiling’s father, businessman Rex Cabiling, who is another person of interest in the murder case.  SFM

Read Next
Martial law in Mindanao: What we know
EDITORS' PICK
House energy committee chair Arroyo bats for cheap electricity
Guarding Sara: Why next VP is getting own security team
Beyond the Chocolate Hills: A farm-to-table, heritage culinary adventure of Bohol
WHO says monkeypox is not yet a health emergency
Metro Manila logged most number of new COVID-19 cases — OCTA Research
A massive highway complex makes living in the South highly attractive
MOST READ
Leon Barretto steps up for sisters, asks dad Dennis Padilla: ‘Please stop resorting to public shaming’
Kathryn Bernardo now proud to be a morena, overcomes insecurities with BF Daniel Padilla’s help
Bea Alonzo, under lie detector test, says she wants prenup agreement with future husband
Marjorie Barretto to speak up on Dennis Padilla, kids’ relationship ‘in time’
Don't miss out on the latest news and information.