Martial law declared in Mindanao; Duterte to fly back home from Moscow

CAYETANO TO STAY BEHIND TO OVERSEE SIGNING OF AGREEMENTS
By: Leila B. Salaverria and Anthony Q. Esguerra - @inquirerdotnet
Philippine Daily Inquirer / 11:24 PM May 23, 2017

MOSCOW – President Duterte put the whole island of Mindanao under martial law as of 10 p.m. of May 23, following violent clashes between government troops and members of the Maute group in Marawi.

The martial law declaration for the island lasts for 60 days, according to presidential spokesperson Ernesto Abella.

“[Deputy Executive Sec. Menardo] Guevarra has clarified that this is possible on the grounds of existence of rebellion because of what is happening in Mindanao based on Article 7, Section 18 of the Constitution. This is good for 60 days,” said Abella.

The development also prompted Mr. Duterte to cut short his four-day official trip to Russia before he had embarked on any of the activities on his schedule.

His meeting with Russian President Vladimir Putin and Prime Minister Dmitry Medvedev will be postponed, but a phone call between Mr. Duterte and Putin is being planned, according to Foreign Affairs Secretary Alan Cayetano.

Defense Secretary Delfin Lorenzana said the whole island of Mindanao was put under martial law even if the clashes were only in Marawi because there are also problems in other parts of the island.

Lorenzana pointed out that Mr. Duterte had already warned that he could be pushed to declare martial law if the situation in Mindanao deteriorates, and that he would use it to solve all of its problems.

He said troops raided the hideout of a top terrorist suspect in southern Marawi City, sparking a gunbattle that prompted the militants to call for reinforcements.

Officials said the gunmen occupied the city hall, a hospital and a jail and burned several houses in a daring attack.

With the martial law declaration, there could be warrantless arrests and the suspension of the writ of habeas corpus.

Lorenzana said the declaration would also allow security forces to control movements in Mindanao, helping them go after lawless elements.

But he also insisted that state forces were in control and were expected to contain the situation.

Abella also said as much.

“The government is in full control of the situation and is fully aware that the Maute/IS and similar groups have the capability, though limited, to disturb the peace; these have shown no hesitation in causing havoc, taking innocent lives and destroying property,” he said.

According to him, Mr. Duterte met with his advisers before declaring martial law. 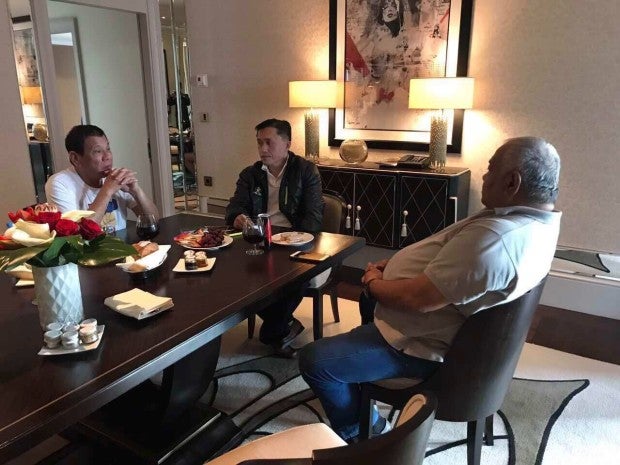 A photo from the palace showed the President meeting with Executive Secretary Salvador Medialdea and Special Assistant Christopher Go before the martial law announcement.

Cayetano said the President did not decide to declare martial law lightly, as he knew it would have implications, such as in tourism.

He also said the signing of agreements between the Philippines and Russia would push through. He will stay behind in Moscow.