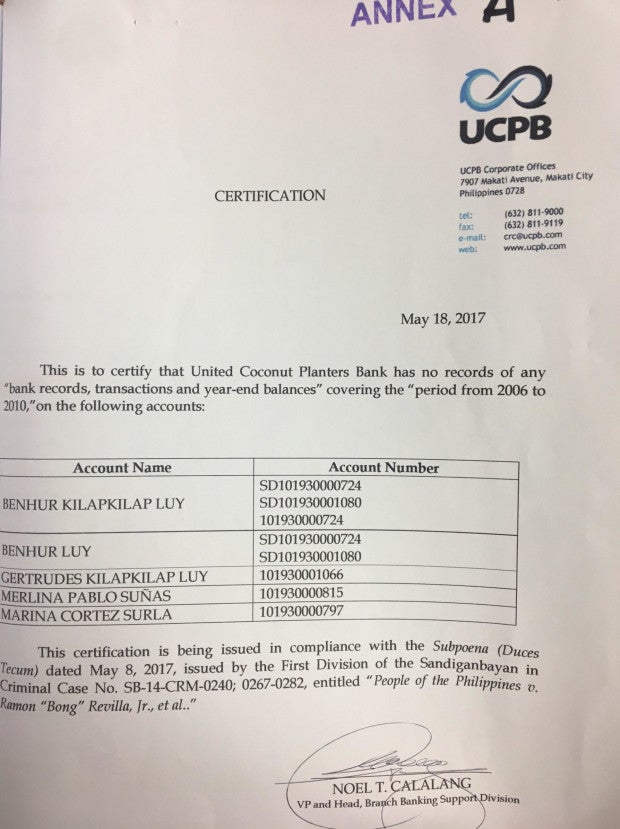 In a three-page compliance report, UCPB said it could not produce the “bank records, transactions and year-end balances” for the years 2006 to 2010, as requested by plunder defendant, former Senator Ramon
“Bong” Revilla Jr.

“UCPB has no records of any documents covering the period from 2006 to 2010 pertaining to the accounts specified in the Request for Issuance of Subpoena,” read the compliance to a subpoena duces tecum issued by the Sandiganbayan First Division on May 8.

Attached with the report was a one-page certification dated May 18 and signed by UCPB vice-president and branch banking support division head Noel Calalang.

In his 12-page request for the issuance of subpoena duces tecum dated May 3, Revilla also sought dozens of accounts with other banks: 24 under Luy’s name, 21 under the name of brother Arthur; four under the
name of mother Gertrudes; 14 under Sula’s name; and six under Suñas’s.

Revilla said the bank records were relevant to his plunder and graft cases, as he maintained that the whistleblowers as well as their employer Janet Lim-Napoles were the ones truly “responsible for the illegal appropriation of the PDAF (Priority Development Assistance Fund) funds.” 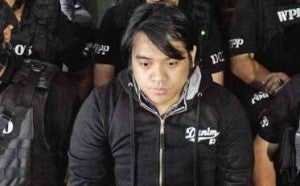 He pointed out that the whistleblowers were also respondents in the Anti-Money Laundering Council’s pending forfeiture case against Napoles at the Manila Regional Trial Court Branch 53.

“Accordingly, an inquiry into the whereabouts of the illegally acquired amount subject of this case must likewise be extended to those deposits recorded in the names of the respondents in the AMLC
Case,” Revilla’s request stated.

Revilla’s plunder trial is scheduled to begin June 1, but the case continued to be bogged down by various issues at the pretrial stage. He is accused of pocketing P224.5 million in kickbacks in exchange for diverting his PDAF allocations to dubious foundations allegedly controlled by Napoles.  SFM/rga