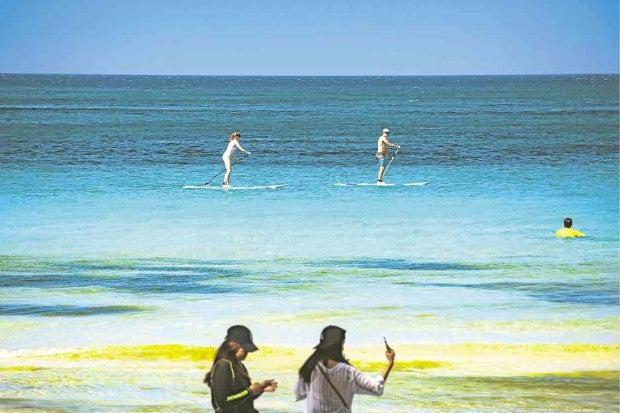 TOURIST PLAYGROUND Boracay Island in Aklan province remains a popular holiday destination for domestic and foreign tourists despite the rapid development that has compromised its environment. —JILSON SECKLER TIU

ILOILO CITY—Environment Secretary Roy Cimatu said environmental problems would be his main concern in tourist areas like Boracay Island, where his priorities would be to ensure that clean water was available and solid waste was managed well in one of the country’s top attractions.

Water quality and solid waste management are among the major environmental problems in Boracay, which has been troubled by largely unregulated development and weak enforcement of environmental laws and regulations.

The 1,032-hectare island, famous for its beaches of fine white sand and turquoise waters, is one of the country’s main tourist spots.

It drew in 1.73 million visitors in 2016, 11 percent more than the previous year, according to the local tourism office.

“The law is there. We have to implement the law in tourist destinations [and] tourist spots,” Cimatu told reporters here on Tuesday on his first regional visit following his appointment as secretary of the Department of Environment and Natural Resources (DENR) last week.

Cimatu said he had directed DENR officials in Western Visayas to give him weekly reports on the water quality in Boracay.

The DENR will also help the local government deal with the solid waste problems of Malay, a municipality in Aklan province that includes Boracay Island, he said.

The provincial environment and natural resources office has ordered Malay’s municipal officials to stop the dumping of residual solid waste at the materials recovery facility in Manoc-Manoc, one of the three barangays in Boracay, amid residents’ complaints of foul odor from the increasing volume of garbage there.

Tons of residual solid waste are being transported to the municipal landfill in Barangay Cabulihan in Malay on the mainland.

One of Sampulna’s proposals is to resume titling lands to minimize property disputes, which at times have turned violent.

Only 292 ha, or less than a third of Boracay, are titled. Most claimants have only tax declarations and tax payments to show as proof of their property ownership or rights.

Sampulna also reported that stakeholders were opposing the planned construction of a standard 30-meter-wide road on the island because it would be too wide.

He proposed reducing the width to 12 meters, but this would require amending Proclamation No. 1064 issued by former President Gloria Macapagal-Arroyo on May 22, 2006.

The proclamation classified Boracay Island into forest land and agricultural land in accordance with the revised forestry reform code.

Cimatu said they would also evaluate another proposal by Sampulna to continue suspending the issuance of environmental compliance certificates (ECC) until the Boracay master plan had been approved.

An ECC is a document which certifies that a proposed project or undertaking will not pose environmental hazards or damage.