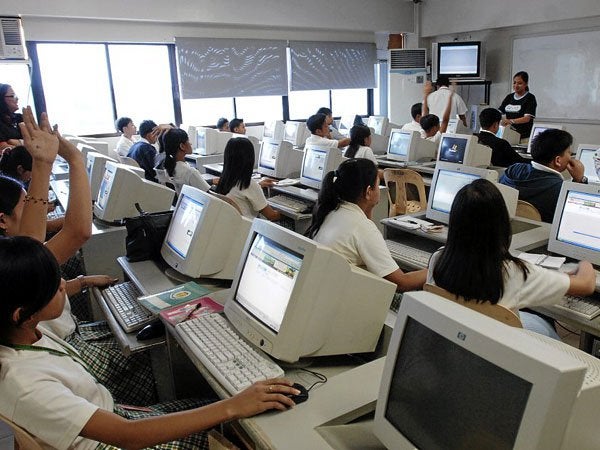 A Philippine private school with a computer for each student in a class. (INQUIRER FILE PHOTO

TACLOBAN CITY, Leyte — At least 12 private schools in Eastern Visayas will increase their tuition this school opening, according to the regional office of Department of Education (DepEd).

The increase ranged from 5.27 percent to 15.4 percent – just within the range allowed by the education department, said Rachel Cuevas, DepEd-8 education specialist supervisor.

These schools are both in the elementary and secondary levels.

Cuevas, however, did not give the actual amounts of the increases sought by these schools except to say that these were within the levels acceptable to the DepEd.

“While the increase should only be at least 10 percent from the current rate, there are still schools which sought for an increase that are more (than 10 percent) but actually are still low compared to other schools,” Cuevas explained.

Thus, they have approved the petition, she said.

Cuevas said these schools would use the proceeds from the tuition increases to pay for the salaries of their teaching and non-teaching personnel and improve their facilities.

“But we make sure that they have conducted consultations with their respective students and parents and there is a resolution approved by the parents-teacher association of the said school,” she said.

She added that the number of schools increasing their tuition rates could still go up as the period for the submission of tuition rate increases has not lapsed.  The DepEd has not acted on the applications of 12 schools for tuition increases.