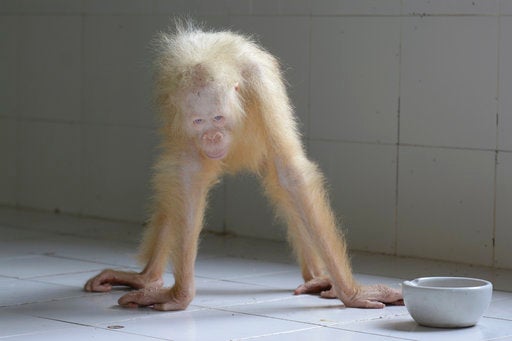 In this May 2, 2017 photo released by Borneo Orangutan Survival Foundation (BOSF), an albino orangutan stands in an enclosure at a rehabilitation center in Nyaru Menteng, Central Kalimantan, Indonesia. The conservation group is asking the public to suggest names for the rare albino orangutan that was rescued from villagers in the Indonesian part of Borneo last month, hoping it will become an inspiring symbol of efforts to save the critically endangered species. (Indrayana/BOSF via AP)

JAKARTA— A conservation group says a rare albino orangutan rescued in Indonesia has been named “Alba” after thousands of suggestions were sent from around the world.

The Borneo Orangutan Survival Foundation says the name means “white” in Latin and “dawn” in Spanish. It hopes the animal will be an ambassador for the critically endangered species.

The 5-year-old female was rescued after being captured by villagers in Indonesia’s part of Borneo island April 29. It was the first albino orangutan to be encountered by the foundation in its 25 years of conservation work.

The foundation is collecting information on albinism in great apes to help decide the primate’s future.

Its CEO, Jamartin Sihite, said, “We can’t simply place Alba in a forest area, nor in a sanctuary, without thoroughly examining all possibilities.”

Read Next
D-day
EDITORS' PICK
Nestlé Philippines’ ‘NESCAFÉ Plan’ bags Grand Anvil at PRSP 56th Anvil Awards
Smart reinforces superiority with best speed and mobile video experience in PH
Every Filipino home can now be a smart home with realme TechLife
New 3,045 COVID-19 cases push PH total active cases to 40,074
LTO’s P500-M deal for screws draws scrutiny
How to lose a PH genius: Wesley So officially a US citizen
MOST READ
US lays out list of aid to ‘satisfy’ Duterte following VFA payment demand
How to lose a Filipino genius: Wesley So officially a US citizen
Robredo on Sara Duterte leading poll surveys: Why are Filipinos drawn to leadership of this kind?
Kris Aquino dispels rumors on son Josh getting married, thanks Ogie Diaz for defending him
Don't miss out on the latest news and information.