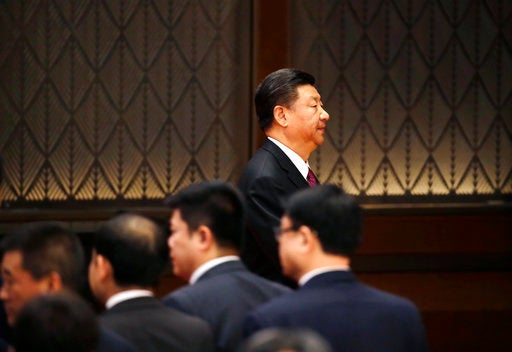 Chinese President Xi Jinping leaves a news conference at the end of the Belt and Road Forum in Beijing, Monday, May 15, 2017. Xi expressed ambitious hopes Monday for Asian and European governments to work closely on finance, law enforcement and a broad range of other issues under a Beijing-led trade initiative as leaders of 30 countries ended a meeting to promote the effort. (Jason Lee/Pool Photo via AP)

BEIJING—Chinese President Xi Jinping wants to rewrite world trade rules and cast himself as a champion of globalization as he capitalizes on a US retreat into “America First” policies, analysts say.

But not everyone is buying the rhetoric.

Xi’s plan was on display this week at an international summit in Beijing to promote his signature foreign policy, the One Belt, One Road initiative that aims to revive ancient land and sea trade routes.

The meeting gave Xi a spotlight to raise his standing abroad and at home, where he faces a crucial Communist Party congress later this year.

World leaders, including Russian President Vladimir Putin, heaped praise on the idea which Xi boasted would be “a project of the century” and “unleash new driving forces for global economic growth”.

Xi emerged as an unlikely capitalist hero at the World Economic Forum in Davos in January when he extolled open trade and denounced protectionism.

He now stands in stark contrast to US President Donald Trump whose pursuit of “America First” policies on trade and foreign relations has given China the chance to reshape the global and political landscape in its favor.

“He (Xi) is very anxious to move as early as possible to take advantage of the vacuum created by Donald Trump and show that China has the capacity to be a rule maker,” China political analyst Willy Lam said.

But Xi’s cherished Silk Road plan has raised concerns that he is seeking to expand China’s economic and political ambitions abroad rather than open up his own country to further trade and investment.

“Hopefully (One Belt, One Road) is not a one-way street but two-way,” European Union Chamber of Commerce in China President Joerg Wuttke told reporters recently.

“I hope China is not just reaching out to the world but actually embracing the world and opening up to foreign trade.”

Despite claims that it welcomes foreign investment, China has long been criticized for erecting barriers in a wide range of sectors from automotive to finance, while also subsidizing its own companies.

It ranked 84th globally — behind Saudi Arabia and Ukraine — in the World Bank’s ease of doing business index for 2016, and second to last in an OECD report on the restrictiveness towards foreign investment.

Many doubt the motives behind its latest plan.

“I don’t think many people are buying the spin that this is all in the name of free trade and global prosperity,” said Andrew Gilholm from global risk consultancy Control Risks.

“I think a lot of countries are going along with it because that’s how much significance political leaders attach to trying to benefit from aligning with China’s economic priorities.”

The China-bankrolled project involves a massive network of ports, railways, roads and industrial parks spanning some 65 countries across Asia, Africa and Europe.

Xi has pledged an extra $124 billion for the plan, on top of the $890 billion already earmarked by the China Development Bank for some 900 projects.

The huge spending plan comes as China looks for ways to spur economic growth, which has slowed in recent years as the country transitions away from a debt-fueled investment-driven model to one more reliant on consumer spending.

But many of the countries involved in the initiative — representing 60 percent of the world population and around a third of global gross domestic product — have poor records on corporate and political governance and there are fears China could run into trouble.

“If projects are not commercially viable this becomes a very expensive commitment at a time when domestic financial strain is rising,” said Gilholm.

But Lam said problems would only start to emerge in the coming years, giving Xi time to use the Silk Road plan to burnish his credentials as a global statesman at home and abroad.

The summit comes ahead of a crucial Communist Party congress later this year.

Regarded as the most powerful Chinese leader in a generation, Xi will secure a second five-year term at the congress and will have the opportunity to promote his favoured allies to the country’s ultimate decision-making body.

Enthusiastic state-media coverage of the two-day Silk Road summit, which was attended by leaders from nearly 30 countries, showered Xi with the sort of attention he craves.

“I think the optics worked out well for him,” said Gilholm.

“But obviously there’s a heck of a lot more to it than just holding an event and having people make nice speeches. It gets harder from now onwards.”/rga