BEIJING—Chinese President Xi Jinping urged world leaders to reject protectionism on Monday at a summit positioning Beijing as a champion of globalization, as some countries raised concerns over his trade ambitions.

Xi addressed almost 30 leaders on the second day of a forum on his new Silk Road plan, an infrastructure project Beijing hopes will revive ancient trade routes from Asia to Europe and Africa.

“Globalization is encountering some headwinds,” Xi told leaders from Spain to Turkey, Russia and Pakistan at a convention center near the Great Wall on the outskirts of Beijing.

“We need to seek results through greater openness and cooperation, avoid fragmentation, refrain from setting inhibitive thresholds for cooperation or pursuing exclusive arrangements, and reject protectionism.” 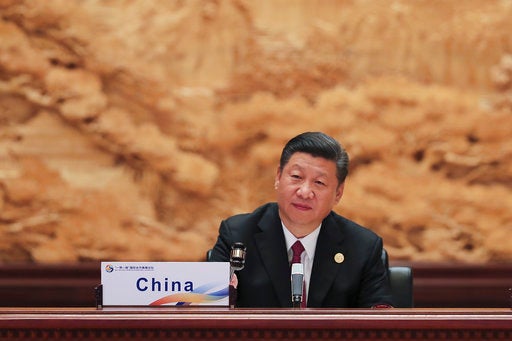 Chinese President Xi Jinping attends the roundtable summit phase one sessions of the Belt and Road Forum at the International Conference Center in Yanqi Lake Monday, May 15, 2017 in Beijing, China. (Lintao Zhang/Pool Photo via AP)

The Chinese leader is using the international gathering to promote his signature foreign policy project, the One Belt, One Road initiative.

At the opening of the meeting on Sunday, Xi pledged to pump an extra $124 billion into the China-bankrolled project, which involves a huge network of ports, railways, roads and industrial parks.

The China Development Bank had already earmarked $890 billion for some 900 projects.

The initiative spans 65 countries representing 60 percent of the world population and around a third of global gross domestic product.

China has defended globalization at a time when the United States is retreating into “America First” policies on trade and foreign relations under President Donald Trump.

While some see Beijing’s project as a geopolitical powerplay, Xi has insisted that the Belt and Road is open to everybody.

“In a world of growth, interdependence and challenges, no country can tackle the challenges or solve the world’s problems on its own,” he said as he sat next to Russian President Vladimir Putin.

Putin and other leaders, including Turkish President Recep Tayyip Erdogan, applauded the initiative, which Xi unveiled in 2013.

“In these times, when the temptation is great to respond to the crisis of globalization by increasing isolation, and by raising walls, this initiative highlights a vision of connectivity, cooperation and dialogue across Europe and Asia but also other parts of the world,” Greek Prime Minister Alexis Tsipras said on Sunday.

British finance minister Philip Hammond said London was “ready to work with all Belt and Road partner countries to make a success of this initiative”.

But some officials expressed caution.

German Economy Minister Brigitte Zypries called for transparency to ensure that the calls for investment bids are “non-discriminatory”.

Some Belt and Road projects are already raising concerns in certain countries.

India skipped the summit as it voiced displeasure at the China-Pakistan Economic Corridor, a Belt and Road project aimed at linking northwestern China to the Arabian Sea.

The route cuts through Gilgit and Baltistan in Pakistan-administered Kashmir, disputed territory that India claims is illegally occupied.

Others at the summit warned sustainable lending practices were needed to ensure countries hosting the hundreds of projects were not saddled with unsustainable debts.

“Unprofitable investments are not good for anybody,” said Andras Vertes, chairman of GKI Economic Research.

While the summit has been given almost non-stop coverage on Chinese state-run television, attention at the event was distracted by North Korea’s latest missile test on Sunday.

Xi did not mention the North during his speech, but it was discussed at a meeting with Putin./rga