Robredo wealth shrank by P2.175 M in her 1st six months as VP 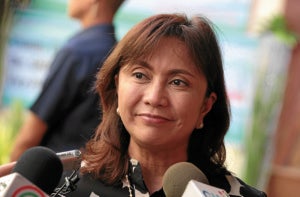 MANILA — Vice-President Maria Leonor Robredo is worth P8,878,111.43 by the end of 2016, reporting that her wealth shrank by P2.175 million during the first six months of her vice-presidency.

These figures were taken from the two Statements of Assets, Liabilities and Net Worth filed for 2016. The June 2016 figures were contained in her undated entry SALN marked received on August 1 last year, while the December 2016 figures were declared in her annual SALN filed this April 27.

The Philippine Daily Inquirer obtained the three-page SALNs from the Office of the Ombudsman on Tuesday, subject to a P30 processing fee.

In this SALN, Ms. Robredo declared her business interest in the Manila Electric Co. (Meralco) as “shares of stock” for “different years.” She did not specify just how much her stake at the corporation was.

The lack of details regarding the Meralco shares is one of the grounds being raised by the so-called “Impeach Leni Movement,” a group of pro-Duterte lawyers and bloggers whose complaint is still pending endorsement at the House of Representatives.

Most of her assets were reflected as personal properties, much of it in cash. Ms. Robredo’s cash assets decreased to P8.94 million from P11.115 million in June.

She also owns eight real properties with acquisition cost totaling P1.735 million. Just like Davaoeño President Rodrigo Duterte, all of Ms. Robredo’s declared properties were located in her hometown, which is Naga City.

The two other properties—a residential lot in Barangay Dayangdang and a memorial lot at Eternal Gardens—were declared donated.

In terms of current fair market value, her Dayangdang house was worth P1,826,875, while the Del Rosario agricultural lots, the orchard, the Sta. Cruz property and the donated Dayangdang lot were cumulatively valued at P2,106,151. This leads to a total of P3.93 million.

Meanwhile, she declared having two relatives in government service: sister-in-law Josephine Bundoc and brother-in-law Rafael Bundoc, who both work as doctors at the Philippine General Hospital in Manila.