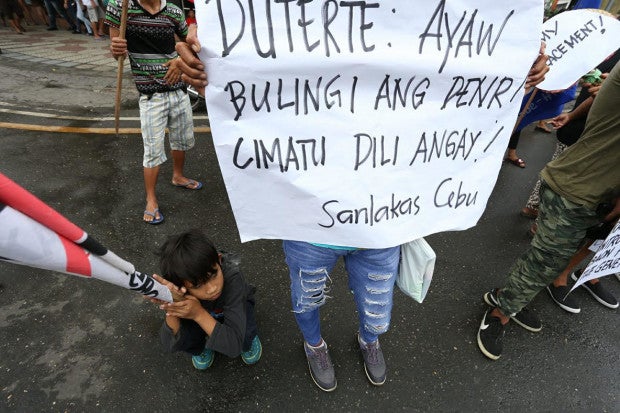 CEBU CITY—At least 60 members of a militant group braved the morning rain on Friday to protest against the replacement of environment secretary Gina Lopez and the plan to operate a coal-fired power plant in Barangay (village) Sawang Calero, Cebu City.

Members of Sanlakas gathered near Sto. Rosario Church about 9:45 a.m.and walked to Colon Street, a distance of about 500 meters, for a rally.

Teody Navea, Sanlakas-Cebu secretary general, said around 100 people were supposed to attend their rally but the downpour caused their delegation in Talisay City to cancel.

The heavy rain also prompted organizers to cut short their program because the rallyists were drenched and had to change their clothes.

But Navea said they wanted to express their disgust at the failure of the Duterte administration to fulfill its commitment to protect the environment.

“It is unfortunate that Lopez was replaced by a military man. What does a military man know about the changes needed in their department?” he said, referring to the appointment of former Armed Forces of the Philippines (AFP) chief of staff Roy Cimatu who replaced Lopez in the Department of Environment and Natural Resources.

“Sayang kaayo si Gina Lopez (It was a waste that Lopez was replaced),” he added.

Navea said that having Cimatu as environment secretary was like designating a “security guard” to protect the interest of mine operators.

“That is not good because Duterte is not doing his promise that change is coming,” he said.

Navea said Sanlakas would have wanted Lopez for an environment secretary because of her promise for change.

Lopez already started a review of mining companies in Cebu and other parts of the country and started issuing closure orders against violators of environmental laws.

Navea said Lopez also made a commitment to eradicate coal-fired power plants and pursue the use of clean energy.

He said that in Cebu there are two coal-fired power plants located in the cities of Naga and Toledo in south Cebu.

“We are calling on President Duterte to be decisive,” said Navea, adding that he hoped that Mr. Duterte would not allow unclean sources of energy.

Navea said they would continue to monitor the Duterte administration as well as Cimatu’s management of DENR.

Sanlakas, which has a membership of around 6, 000 people coming from the youth, labor, women’s, fisherfolks sector, among others, will also continue to hold protest actions to remind the Duterte administration of the need to ensure environmental preservation for the future generation.

If needed, Navea said, their group will join forces with environmental groups in calling for Mr. Duterte’s resignation from office./rga