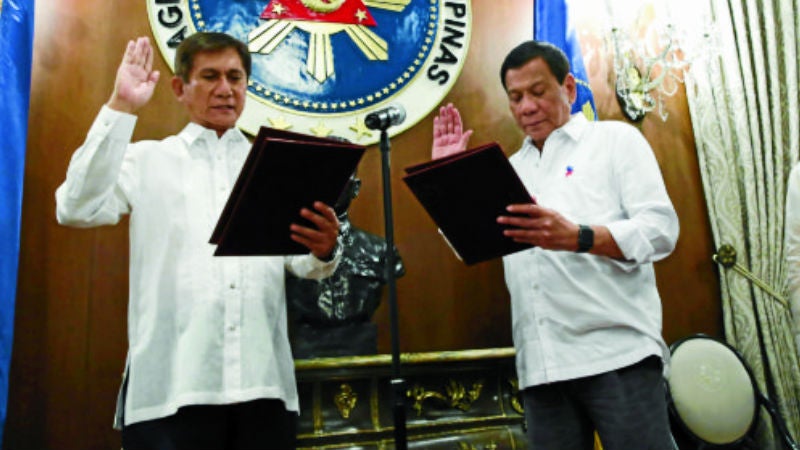 Cimatu, a member of Philippine Military Academy Class of 1970, took his oath before Mr. Duterte on Monday, before the start of the Cabinet meeting.

“The Palace announces the appointment of Mr. Roy A. Cimatu as secretary of the Department of Environment and Natural Resources (DENR),” Mr. Duterte’s spokesperson Ernesto Abella said in a statement.

“We are confident that Secretary Cimatu shall faithfully serve the interest of the country and the Filipino people in his capacity as the new DENR secretary,” Abella said.

Groups that had been holding mass actions on Monday morning to call for the reinstatement of Lopez were floored when Malacañang announced her replacement, even as miners welcomed Cimatu’s appointment with “cautious optimism”

Among the groups was Greenpeace, some of whose members had chained themselves to the DENR central office gates for the day to dramatize their support for Lopez and to protest the triumph of what they called “business interests” on the Commission on Appointments.

“The problem with somebody who has no track record or background [in environmentalism] is he wouldn’t see the importance of a healthy ecosystem to maintain the economy,” Cinches said shortly after news of Cimatu’s appointment broke out.

Cimatu was Armed Forces of the Philippines chief of staff from May to September 2002, during the Arroyo administration.

Rabusa claimed that Cimatu took home a total of P110 million upon retirement. Appearing before the Senate, Cimatu denied Rabusa’s claims, saying his only pabaon were the 40 medals and citations he received during his 37-year military career. The plunder charges were dismissed by the Ombudsman in 2012.

Shortly after his retirement in 2002, Cimatu was named Middle East crisis manager after President Gloria Macapagal-Arroyo ordered the immediate evacuation of all Filipinos in Iraq, when the US attack on Iraq was imminent.

Cimatu then became the special envoy to the Middle East, who was also the chair of the Philippine Middle East Preparedness Committee. When President Benigno Aquino III assumed office, he extended Cimatu’s term and the committee’s operations up to June 30, 2011.

One of the groups that converged on Mendiola on Monday to call for Lopez’s reinstatement rejected Cimatu outright.

“We do not need a yes man. What we need is a person who shares the people’s stand against the destruction of the environment,” said Sanlakas secretary general Aaron Pedrosa.

The Chamber of Mines of the Philippines (COMP) welcomed the appointment of Cimatu but was careful in raising hopes that the new DENR leadership would usher in a more balanced approach to the job.

“His sterling record in government service speaks well of General Cimatu and we hope that his appointment finally answers our long-held call for a DENR secretary who has a balanced appreciation for environmental protection and natural resources management,” COMP vice president Ronald S. Recidoro said by phone.

Recidoro said the chamber remained committed to working with the Duterte administration in promoting responsible mining.

“[W]e look forward to working with Secretary Cimatu in enforcing our country’s environmental and natural resource laws,” he said.

COMP has publicly expressed its opposition to Lopez, following her order to shut down 23 mining operations for allegedly ruining watershed areas.

She also ordered the suspension of five mining firms, canceled scores of mining contracts and even called for the prospective ban on open-pit mining.

Her failure to secure her appointment has given rise to talk of miners using lobby money to convince lawmakers on the Commission on Appointments to vote against her, an allegation that COMP denied.

Fr. Edwin Gariguez, executive secretary of the Catholic Bishops’ Conference of the Philippines’ National Secretariat for Social Action, joined calls for an investigation of claims that lobby money played a role in the CA’s rejection of Lopez.

He issued the statement following Mr. Duterte’s remark that lobby money influenced the rejection of Lopez’s appointment as environment secretary.

Senate Minority Leader Franklin Drilon said he, too, was pushing for Senate President Aquilino Pimentel III to investigate the alleged lobby money because it “affected the integrity of both the CA and the individual members.”

Pimentel said he was open to an investigation as long as there was evidence he could work on.