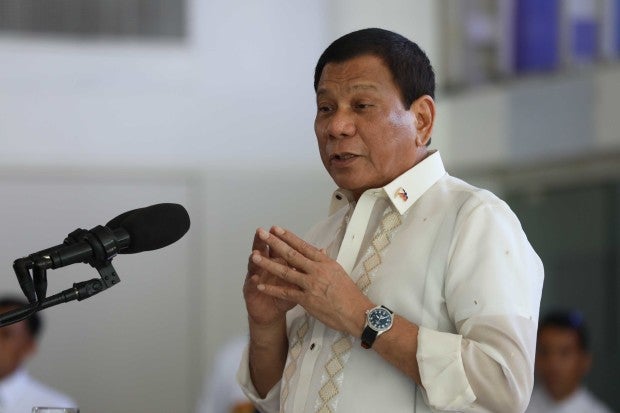 President Rodrigo Roa Duterte delivers his speech at the Ninoy Aquino International Airport on May 10, 2017 prior to his departure for his official visits to Cambodia and China and working visit to Hong Kong. The President is scheduled to participate in the World Economic Forum (WEF) on ASEAN 2017 in Phnom Penh, Cambodia, meet with the Filipino community in Hong Kong, and attend the Belt and Road Forum in Beijing, China. (Photo from Malacañang)

President Rodrigo Duterte railed on Wednesday against claims that there was no evidence that the use of methamphetamine, or shabu, causes brain damage.

Duterte continued to insist that shabu would adversely affect a person’s brain and could induce its users to harm even their loved ones. His statement came from an American study, he said.

“As a matter of fact, it’s an American forensic study that it shrinks the brain of a person. That’s not ours,” he said in a news briefing before leaving for Cambodia.

He made the statement when asked about the contention of an expert during a recent drug forum in the Philippines that there was no evidence that methamphetamine use shrinks a person’s brain.

Agnes Callamard, the United Nations special rapporteur on extrajudicial killings, had cited the study of the expert, neuroscientist Carl Hart, and linked to it on her Twitter account.

Duterte did not believe the statement that shabu had no effect on the brain. The claim was “bullshit” to him, he said.

“That is why I will not talk to them because my experience until now and 23 years ago when I became the Mayor of Davao City was always a lot of violence and killing because of shabu,” he said.

He also said that, if shabu was not harmful and good for Filipinos, he would have made the drug readily available.

Duterte had cited the harmful effects of shabu as a reason for his intense crackdown on the illegal drug trade. He had said many of the drug users become dysfunctional, some of them even beyond redemption. /atm