10 lawmakers, 5 of them from LP, join PDP-Laban 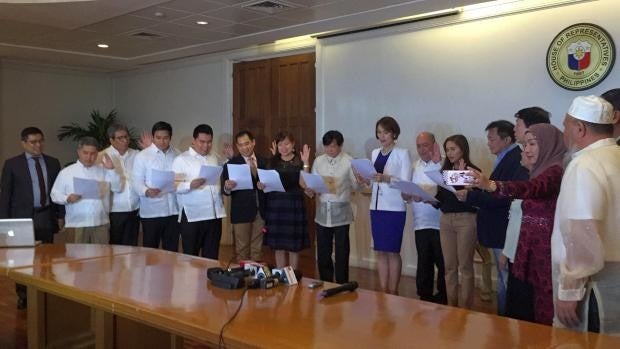 The addition of 10 new members increased the hold of PDP-Laban to 121 of the 292-seat chamber,.

Five lawmakers of the erstwhile ruling Liberal Party, along with five others from various parties, have jumped shipped to the administration party, the Partido Demokratikong Pilipino-Lakas ng Bayan (PDP-Laban).

The addition of 10 new members increased the hold of PDP-Laban to 121 in the 292-seat chamber, Alvarez told reporters after the oath-taking.

Alvarez said the burgeoning number of PDP-Laban members only meant that there was increasing support for President Rodrigo Duterte despite the two impeachment complaints lodged against him.

The impeachment complaints against the chief executive will be tackled by the House justice committee next week.

Roman, who gained flak from her youth followers for her controversial vote for the death penalty, said she decided to join the administration party because she shared the vision of President Rodrigo Duterte.

She admitted that politics was also a factor because she was after the welfare of her constituents in Bataan.

“Aside from my vision for the entire country which I share with the President – because I was sure of his vision, he has a very good intention – I also look after the welfare of my constituents,” Roman said.

Vargas, who was known to be close to Quezon City Rep. Feliciano Belmonte Jr., Liberal Party vice chairman and former House Speaker, said the LP family which welcomed him since he started as congressman understood his reasons for leaving.

(“I said goodbye to my friends there at the LP, and they understood when I said goodbye, because I just want to focus on my constituents and deliver services like housing, jobs and education for all Filipinos.”))

Castelo put it more bluntlyL He said he had not yet officially said goodbye to the LP, but that he needed to sacrifice the LP for the noble purpose of taking care of his constituents.

“We would like to be part of this historic journey in transforming our country, the Philippines, into a great one,” he said. “And we are bound now to realize it in the little ways that we could do to realize this noble objective is to support the legislative agenda of the President and Speaker Alvarez.”

“So we have to sacrifice our party to achieve this noble purpose,” he added.

Alvarez and Deputy Speaker Miro Quimbo, the highest-ranking Liberal Party official in the House, earlier confirmed the exodus to the Philippine Daily Inquirer that further decimated the already minority party.

“Said members talked to me previously advising me of their move,” Quimbo said.

The transfers would further reduce the Liberals in the lower House from 32 to 28, a far cry from its membership of 100-plus during the administration of former President Benigno Aquino III.

The PDP-Laban, from mere three members during the 16th Congress, swelled in number to over 90 members in the 292-strong chamber.

Roman, who made history as the country’s first transgender lawmaker in Congress, was put in the spotlight for the sudden change of heart when she voted for the controversial administration pet bill seeking to restore the death penalty on drug offenders.

A staunchly Catholic lawmaker, Roman said she voted in favor of the death penalty based on the stance of her constituents., although her vote shook her conscience.

The administration party PDP-Laban is in a supermajority coalition with other political parties such as the Liberal Party, the Nacionalista Party, National Unity Party, Nationalist People’s Coalition, and the party-list bloc. /atm