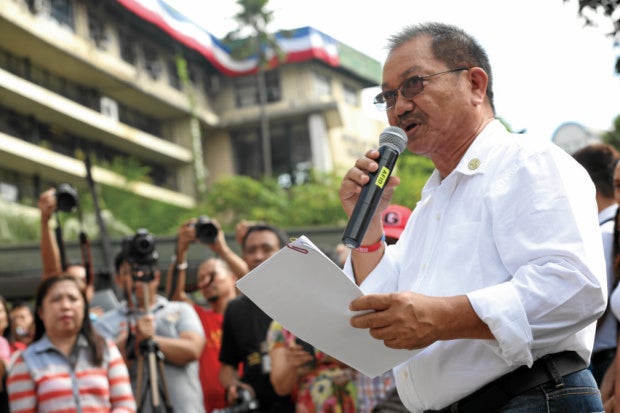 “There are these traders from Bulacan and Binondo who speculate to control prices…We must stop this rice cartel,” Piñol said, adding that the cartel has been pushing for his ouster.

“This is the cartel [composed of] people who can wage a campaign against you. They control it. However, my policy is no rice importation even for corn as even imported wheat floods our local market,” he said on Tuesday during a visit here.

Piñol said the buying price for palay must fall within the P20-P22 a kilo range, to balance the rice purchases of the private sector.

He said farms must develop more livestock projects which would consume rice straw left rotting in fields after harvests.

Piñol also said he has formed a task force to look into the implementation of new regulations controlling the importation of high fructose corn syrup (HFCS).

He was criticized for suspending in March the enforcement of a Sugar Regulatory Administration order that has imposed stiff tariff and duties on HFCS.

A soda bottling company tried to stop the order but lost in court. Piñol said two of the largest soda bottling firms had relied heavily for the past five years on imported HFCS when the prices of local sugar doubled.

He said he has lifted his earlier order and pushed for a regulated import of HFCS.

He lamented the high production cost of sugar, which, he said, discouraged soda companies from buying local sugar.

Sugar producers and workers in Cagayan and Isabela provinces have been discussing the impact of HFCS imports on their trade.

Wholesale prices of sugar have plunged to P1,200 a sack, from P2,000 a sack in the same period last year, but deliveries have also dwindled, said Remegio de la Cruz, a member of a Cagayan sugarcane planters’ cooperative.

Government data showed that beverage makers and food processors imported 800,000 metric tons of HFCS since 2011, replacing a demand for 23 million bags (each weighing 50 kilos) of locally produced sugar and depriving the country of P35.2 billion in potential income. For the present crop year, HFCS importation has pulled down sugar prices from P1,800 to P1,300 a bag, or potential revenue losses of  P20 billion.  SFM