Whale nursed back to health in La Union 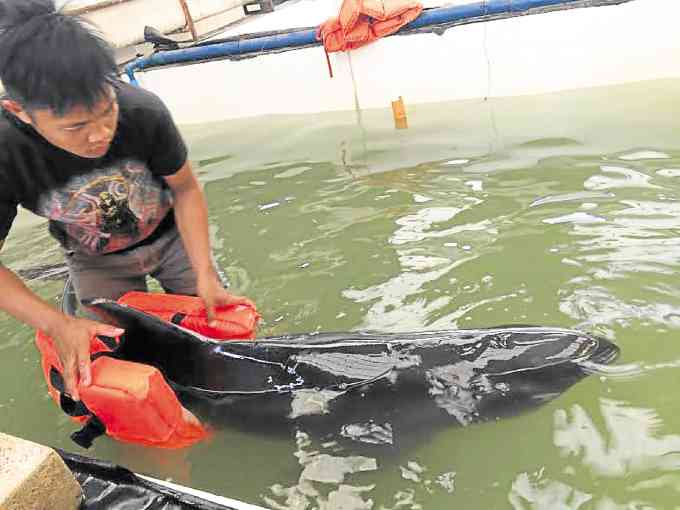 STO. TOMAS, LA UNION—In a concrete tank, “Agustina” swims feebly, aided by an orange floater from which it tries to wriggle away. Agustina is a female melon-headed whale that was stranded on a beach in the coastal village of San Agustin in San Fernando City on April 30.

The 6.2-foot- (1.89 meters) long whale was rescued and brought to a Bureau of Fisheries and Aquatic Resources (BFAR) facility here on a Sunday when its tanks were empty and its staff was not around.

But BFAR employees rushed to the facility to save her when they got the call.

The whale bore scratch marks all over its body and fins. It also had wounds which could have been inflicted by other creatures like sharks or when it hit rocks or was caught by a net, according to the BFAR staff.

“It was like we were taking care of a baby. We wanted Agustina to get well so we can return it to the sea,” said Imelda Sarmiento, officer in charge of the BFAR facility.

The employees filled the tank with sea water and consulted a government veterinarian in another province about the best medication regimen for Agustina, Sarmiento said.

The whale appeared exhausted and had refused nourishment at first.

“The liquid that came out of the animal’s blowhole had traces of blood and phlegm. We had to force-feed it by opening its mouth and pushing the fish inside. We also used a hose to give it distilled water,” she said.

The BFAR staff also detected a wound on the whale’s side, which veterinarian Samantha Licudine described as a shark bite.

“We can’t really know what happened to the whale. We can only hope that it would respond to medication and that there is no internal hemorrhage,” she said.

“The whale’s head should be rounded. But it acquires a peanut-shaped head when it has lost a lot of weight, or is near starvation,” she added.

The whale has to be monitored constantly to prevent it from rolling on its side and drown.

Dexter Sarmiento, a BFAR employee trained to handle marine mammal stranding, prodded the whale to eat by placing fish near its mouth.

Agustina would seize its meal, which was coated with antibiotics and vitamins. —YOLANDA SOTELO