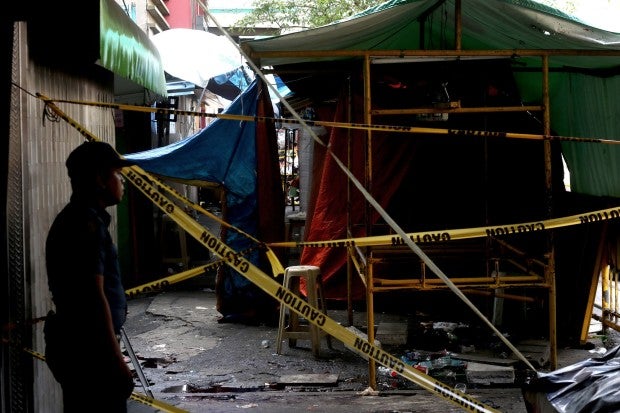 The blast site where at least 14 people were injured following an explosion at a commercial area along Quezon Boulevard, Quiapo, Manila. INQUIRER PHOTO / RICHARD A. REYES

Grab Philippines on Sunday confirmed that one of the two fatalities in the twin explosions that rocked Quiapo, Manila Saturday evening was one of its “GrabExpress” partners.

“Grab Philippines condemns perpetration of the bombing on Saturday at Norzagaray Street in Quiapo, Manila. We are deeply saddened the incident took the lives of two civilians, including one of our GrabExpress partners,” Grab Philippines said in a statement.

“We are one with authorities in pursuing justice for those who needlessly lost their lives and were hurt. We pledge our full support and cooperation in the conduct of their investigation,” it added.

GrabExpress is the ridesharing firm’s on-demand delivery service in Metro Manila, which transports parcels straight from the user to the recipient with real-time tracking and notification.

Grab Philippines, however, said it would refrain from giving more details “in respect to the ongoing investigation” and to “let the proper authorities make further statements.”

Police said the first explosion originated from a package delivered to the lawyer’s office. Authorities are still investigating the motive for the attack, but the National Capital Region Police Office (NCRPO) has ruled out the angle of terrorism.

On April 28, during the Association of Southeast Asian Nations (Asean) summit in Manila, a “homemade pipe bomb” also exploded near the Tower Lodging House on Quezon Boulevard in Quiapo, injuring at least 14 people. JE