The first explosion, which happened at around 5:40 p.m. on Gunao Street, at the office lawyer Nasser Abinal, president of the Imamate Islamic Center.

Shortly afterwards, the Manila Police District (MPD) secured the area around the , closing the street to traffic, according to a report by Radyo Inquirer.

At around 8:30 p.m., another there was another explosion, this time at the Norzagaray and Elizondo Streets.

This happened as Chief Supt. Oscar Albayalde, director of the National Capital Region Police Office (NCRPO), was about to wrap up a media briefing on the earlier explosion. With Albayaldo was Chief Supt. Joel Coronel, MPD chief.

Albayalde said the first explosion originated from a package delivered to the the lawyer’s office.

In an interview with the ABC-CBN News Channel (ANC), Albayalde said that two police officers from the Explosives and Ordnance Division and Scene of the Crime Operatives, were injured in the second blast.

The police officials added that they had ordered a lockdown on Norzagaray and Elizondo Streets while a bomb-inspecting robot was sweeping the area to ensure that a third blast would not occur.

After the media briefing the two police officials were quickly escorted out of the area.

In a tweet shortly after the first blast, Sen. Richard Gordon, chairman of the Philippine Red Cross (PRC), said three people were also reported injured in the blast.

He said the PRC Operations Center dispatched an ambulance to the blast site.

As of writing, police have not identified the two fatalities, whom Albayalde said were those who delivered and received the package.

Three other persons were taken to the hospital, but Albayalde said that they are already “out of danger.”

A fourth person, on the other hand, sustained bruises.

Albayalde said that an investigation is still ongoing to determine the motive for the attack.

Albayalde said the April 28 blast apparently had nothing to do with the Association of Southeast Nations (Asean) Summit, which was then in progress in the Philippine capital.

Authorities then ruled out terrorism as the motive for the blast that ripped through a peryahan, or a cluster of game stalls, and said that it was just the result of a neighborhood gang war. /atm 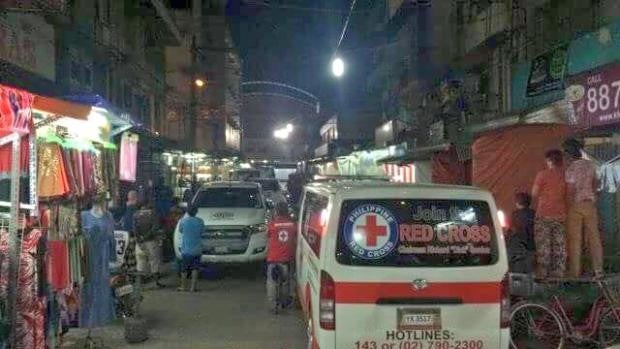 The Philippine Red Cross dispatched an ambulance to the Quiapo blast site. (Photo courtesy of the PRC via Sen. Richard Gordon)