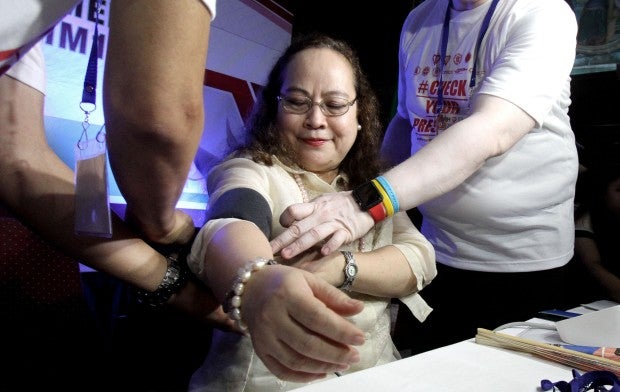 Health Secretary Paulyn Ubial have her blood pressure check during kick-off celebration of the 8th National Hypertension Awareness Month through nationwide blood pressure screening for month of May at Bulwagang Katipunan in Manila City Hall, Manila. The health agency in the country said hypertension remains to be the leading cause of illness and a primary contributor to premature death projecting around 200,000 deaths yearly attributed directly or indirectly to high blood pressure. INQUIRER PHOTO/RICHARD A. REYES

About 12 million Filipinos are hypertensive and half of them are “walking time bombs” who could succumb to a heart attack or stroke because they are unaware of their condition. To raise greater awareness of hypertension, the Department of Health (DOH) on Thursday launched a monthlong campaign to screen Filipinos for abnormal high blood pressure.

Called the May Measurement Month 2017 (MMM17), the campaign aims to screen at least 1.7 million Filipinos for hypertension as part of a global screening effort targeting 25 million people, the DOH said.

“Some of these unsuspecting hypertensive individuals are extremely at risk and can be considered  ‘walking time bombs’ because anytime they can figuratively ‘explode’ to develop complications like massive stroke, heart attack, heart failure and kidney failure,” said Health Secretary Paulyn Ubial.

Hypertension is a primary contributor to premature death in the country, with 200,000 deaths every year due directly or indirectly to high blood pressure, according to the DOH.

A department report said hypertension was the third leading cause of morbidity in 2014, behind topnotcher acute respiratory infection and pneumonia.

Ubial said screening would be a cost-effective way to identify at-risk individuals early enough to reduce their healthcare costs, increase their productivity and prevent a rise in the overall disease rates.

She urged Filipinos to support the campaign by getting screened this month for hypertension and other noncommunicable diseases like diabetes at local health centers, rural health units or hospitals.

Health workers would need to take a person’s blood pressure several times to establish whether that individual has hypertension. Those diagnosed with hypertension would be encouraged to enroll in the DOH Hypertension and Diabetes Registry and Club for regular checkups and maintenance medicines.

“We advise the public to know their blood pressure and adopt a healthy lifestyle because your health is in your hands,” Ubial said.

She suggested regular exercise, a diet that is low in fat, sugar, salt and high in fiber, and avoiding tobacco and alcohol consumption to lower the risk of hypertension.

The DOH chose Manila as the pilot site for MMM17 because of Mayor Joseph Estrada’s focused health-care programs and policies, including the citywide smoking ban and free maintenance medicines for the city’s senior citizens.