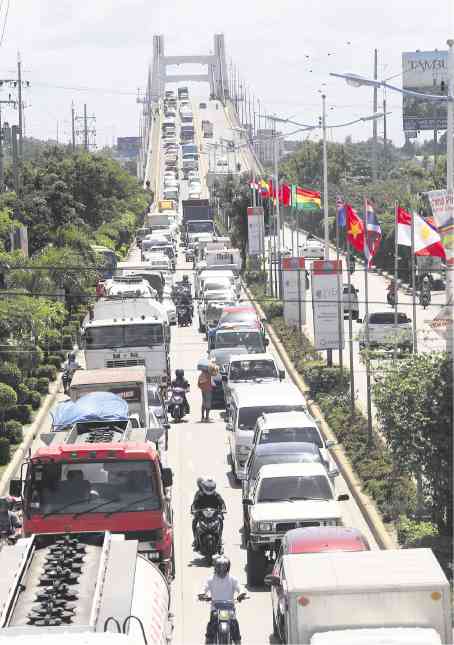 INFRA SPENDING The government, through the Department of Public Works and Highways, is embarking on a massive infrastructure spending to ease traffic jams in Cebu province. —JUNJIE MENDOZA/CEBU DAILY NEWS

CEBU CITY—Cebuanos are in for an infrastructure boom as the Department of Public Works and Highways (DPWH) is set to start rolling out big-ticket projects to solve two of Cebu province’s biggest development headaches—traffic and flooding.

On top of the list is the P50-billion Metro Cebu Expressway that will connect Naga City in the south to Danao City in the north.

Construction of this project is set for next year, according to Public Works Secretary Mark Villar in an interview with reporters at the Radisson Blu Hotel here on Wednesday.

“I’m sure you’re already looking for solutions to traffic. I just want to reassure Cebuanos that we’ve been working on this per instruction of President Duterte because he loves Cebuanos so much. He wants to have solutions to your problems here, specially on traffic,” said Villar, who attended a meeting of regional directors of the DPWH.

Two underpasses in the cities of Cebu and Mandaue are planned to be built this year.

Villar said the DPWH was studying the establishment of retarding basins and mini dams as long-term solutions
to flooding.

His agency has also started conducting feasibility studies for the construction of bridges connecting the different island provinces in the Visayas.

Biggest project
Last year, the Duterte administration’s economic team unveiled its strategy to “build, build, build” as a way of boosting economic growth through spending on major infrastructure projects around the country.

Villar said the DPWH had conducted feasibility studies for the 74-kilometer Metro Cebu Expressway project and would work on the detailed engineering design so bidding and construction of the first of three phases could start next year.

The expressway’s first phase will run from Talisay City to Cebu City and then to Mandaue City. Its second phase covers the Consolacion-Liloan-Compostela-Danao City section while the third phase will be from Naga City to Minglanilla town.

Construction of the project will be fully funded by the DPWH although Villar hinted that the government might bid out the operation and maintenance of the expressway to a private company.

The project, which will have four to six lanes, will be the biggest infrastructure project in Cebu, Villar said.

“With the construction of the project, travel from Naga City to Danao City will take only an hour. So you can see, napakalaking bagay (it’s a big thing),” the secretary said.

Although it will be done in phases, the project is targeted to be finished before Mr. Duterte steps down from office in 2022.

Villar said the DPWH’s biggest challenge was the acquisition of several properties along the project route through road right-of-way.

“For any ambitious project, there are really a lot of challenges. But we have to do it. We have to find a solution. Otherwise, what will happen to Cebu? Will traffic be here forever?” he said.

The DPWH is also starting two underpass projects in Cebu.

The first is a P750-million underpass at the intersection of N. Bacalso Avenue and F. Llamas Street.

Villar said construction would begin this year, with the project completed in one to two years.

“It will reduce travel time from Cebu City to Talisay City by almost [half], that’s our prediction,” he said.

The other project is along the perennially congested UN Avenue in Mandaue City and will cost close to P1 billion.

Bidding for this project is set for third quarter of this year while construction is expected to be completed in the next two years.

Villar said the DPWH was eyeing the Cebu City Sports Center as site for a retarding basin.

He said this could be built under open spaces to store floodwater during heavy rains. The impounded water could
be released or used for other purposes.

The DPWH, he said, was identifying locations in the mountainous areas of Cebu City for the possible site of a
mini dam.

“We are looking for solutions and they can expect that there will be solutions on the problems of flooding and traffic. And we will allocate, the government is going to allocate, resources to solve the problem before the President’s term ends,” he added.