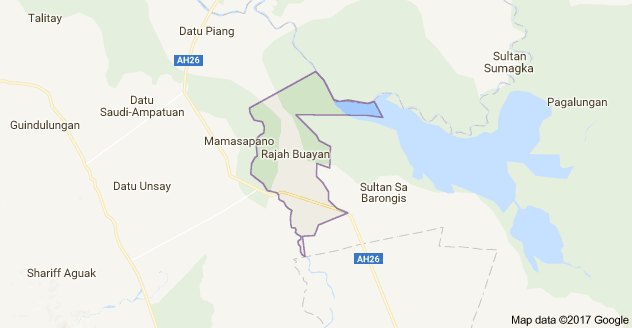 COTABATO CITY – A suspected drug pusher, a mother and her two children were killed when drug suspects traded shots with anti-drug operatives in Raja Buayan town in Maguindanao Tuesday.

Senior Police Officer 2 Mohammad Ampatuan of the Raja Buayan town police said the targets of several search warrants opened fire and lobbed grenades at government forces, who were conducting an anti-drug operation in Barangay Panadtaban at about 2 p.m. Tuesday.

The shootout led to the deaths of Normin Tantong and her children, a five-year-old and an infant. Also killed was one of the suspected drug pushers, the police said.

Ampatuan said the two other subjects of the search warrants managed to escape although they got injured in the firefight.

Mayor Zamsamin Ampatuan of Raja Buayan said the village of Panadtaban has been known as a trading area for illegal drugs.

Ampatuan said he was sad the suspects did not even think of their relatives in the house when they opened fire on government forces.

He added that the Bangsamoro Islamic Freedom Fighters (BIFF) has been protecting the illegal drug trade in the village.

The anti-drug operation in Maguindanao had been intensified since the start of the year and has netted several suspects, including elected officials.

Guiama’s arrest came two days after a Maguindanao village councilor — who had been under surveillance by anti-narcotics operatives for peddling and using prohibited drugs — was arrested in Datu Odin Sinsuat town.

Alibonga said one big sachet of methamphetamine hydrochloride or “shabu” with a market value of about P20,000 and marked money were seized from Imam.

Utto’s arrest was preceded by the fall of Fatima Daud Baliwan, a village chair in Kabuntalan town.

She was arrested along with her son and two others in Cotabato City, during which, they also yielded several sachets of shabu, firearm and credit cards and a luxury vehicle.

President Rodrigo Duterte earlier said Maguindanao has become one of the provinces that have been infiltrated by narcopolitics.

Sangki and Montassir Sabal continue to elude arrests while Samsudin Dimaukom was killed in a clash with policemen in Makilala, North Cotabato in October 2016.  Dimaukom’s brother, Abdulwahab, was arrested in September while Anida had kept herself in seclusion in Datu Saudi town. There has been no update on Salasal’s whereabouts as of yet.  SFM