For the first time in recent history, the Labor Day rally in Davao City, hometown of President Duterte, its longtime mayor, had no effigy of the incumbent president.

Davao activists would usually burn an effigy of the President along with the visual representations of the military and the US government during the commemoration.

“There are no effigies of President Duterte because we believe that our engagements with him on issues concerning basic rights are still continuing,” said Sheena Duazo, secretary general of Bagong Alyansyang Makabayan (Bayan) in Southern Mindanao.

The engagements, she said, included the push for significant reforms in politics, governance, social services and the economy.

What was presented on Monday was the figure of a warplane loaded with missiles along with the faces of US President Donald Trump, Defense Secretary Delfin Lorenzana and Armed Forces of the Philippines chief of staff Gen. Eduardo Año.

“We consider these people as antipeace for they oppose the efforts to end the conflict and to implement socioeconomic reforms,” Duazo said.

At least 10,000 workers and activists marched in Davao City, part of rallies staged nationwide to demand wage increases, more jobs and an end to labor contractualization, or “endo” (end-of-contract) scheme.

Endo refers to the widespread practice among employers in which contracts are ended in the fifth month so workers are not regularized.

Carl Olalo of KMU-Southern Mindanao said that while Mr. Duterte was working on his campaign promises, labor violations such as mass dismissals, union busting and unfair labor practices were documented in Davao.

In Cagayan de Oro City, hundreds of workers also took to the streets.

In the Visayas, about 12,700 workers and other protesters staged marches on Labor Day. They included 5,000 in Roxas City in Capiz province, 3,000 in Iloilo City, 2,000 each in Cebu City and Kalibo in Aklan province, 500 in Estancia in Iloilo province, and 200 in Tacloban City.

They pushed for a P750 daily minimum daily wage nationwide for workers in the private sector and P16,000 monthly minimum wage for government employees.

In Cebu City, close to 2,000 members of the Associated Labor Union-Trade Union Congress of the Philippines (ALU-TUCP) called for an end to endo in front of the Department of Labor and Employment (Dole) regional office on Gorordo Avenue.

In Estancia, 500 protesters led by Bayan Muna and Hugpong Kababaihan held a rally in front of the municipal hall, demanding wage increase and free and decent housing.

About 200 joined a protest action led by Sanlakas and People’s Surge before the Dole Eastern Visayas office in Tacloban City.

Cathy Jean Punay, 30, a survivor of Supertyphoon “Yolanda,” was among among those who joined the rally. She sought the release of shelter assistance for her family and asked the government to help find jobs for unemployed people like her.

Her husband, Norman, 33, works as a security guard but his daily income of P230 is not sufficient to meet their daily needs, Punay said.

Rallies and motorcades kicked off early on Monday with meet-up points in Batangas City in Batangas province, Antipolo City in Rizal province, Carmona town and Dasmarinas City in Cavite province, and in the cities of San Pedro, Biñan and Sta. Rosa in Laguna province.

By noon, workers’ unions merged for the “regional salubungan” at Crossing in Calamba City, Laguna.

At least two people died and several others were injured when the fire broke out inside the factory that manufactured prefabricated houses for export to Japan.

In Bicol, at least 200 joined the march in Legazpi City.

In Manila, ALU-TUCP warned of “an uprising among the working poor” if the government continued to ignore worsening poverty caused by joblessness, low wages and short-term work arrangements. 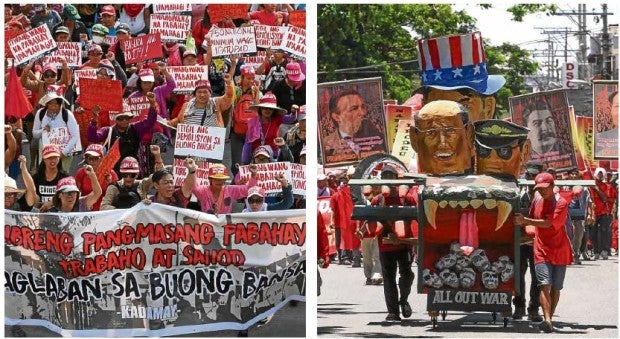 The Federation of Free Workers, for its part, also appealed to the President to put an end to contractualization in all its forms “and leave a lasting legacy to Philippine labor.”

In Pangasinan province, labor groups brought their message of solidarity and criticisms about the government’s labor contractualization policy to the beaches to reach thousands of beach goers.

The “Pista’y Dayat” (Sea Festival) in Pangasinan is celebrated on May 1 when residents go to the beaches because of a belief that this is when the sea has healing properties.

The groups started their caravan at the San Fabian beach and proceeded to Dagupan City. They also visited the beaches in Binmaley and Lingayen towns.

In Olongapo City, 150 members of the labor group Workers for People’s Liberation (WPL) marched on the streets, calling for an end to contractualization.

The WPL held simultaneous rallies in the City of Malolos in Bulacan province and Plaza Miranda in Angeles City in Pampanga province.

Around 2,000 workers and farmers from the Central Luzon provinces of Aurora, Bataan, Bulacan, Nueva Ecija, Pampanga, Tarlac and Zambales gathered at the main gate of the Clark Freeport in Angeles City at noon.

Roman Polintan, chair of Bayan in Central Luzon, said the groups started marching from the provinces on April 30.

Pol Viuya, spokesperson of the Workers Alliance for Region 3, said his group was campaigning against “the neoliberal attacks of imperialism.”

Speakers also urged the continuation of peace talks between the government and the communist rebels to settle issues like free distribution of land and implementation of a national industrialization program.

In Baguio City, around 50 activists from the Cordillera Peoples Alliance and the local KMU chapter and members of the Philippine Nurses Association (PNA) marched on Session Road to demand fair treatment for workers.