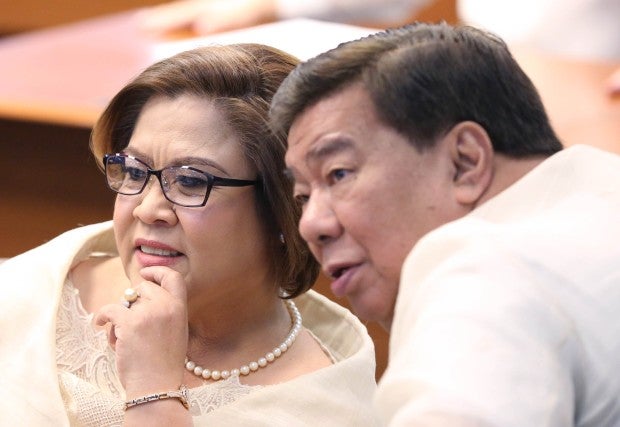 Senate President Pro Tempore Franklin Drilon with Sen. Leila De Lima at the opening of the 17th Congress at the Senate, July 25, 2016. Drilon and other Senate minority senators visited De Lima on Monday, May, 1, 2017, at the PNP Custodial Center in Camp Crame and said that she was ‘okay’ and ‘in high spirits.’ De Lima is detained while facing charges for allegedly receiving drug money from prisoners at the New Bilibid Prisons. PHILIPPINE DAILY INQUIRER FILE / MARIANNE BERMUDEZ

Senator Leila de Lima was in “high spirits” when her fellow opposition senators visited her at her detention cell at Camp Crame in Quezon City on Monday.

De Lima has been detained at the Philippine National Police (PNP) Costodial Center since last February over drug charges.

Hontiveros said De Lima was busy reading the Bible and other materials so she would be updated in what is happening in the outside world.

Trillanes, who was also jailed after leading the Oakwood mutiny in 2003, believes that De Lima was safe in her detention cell.

Just like them when they were detained, Trillanes said De Lima does not have an airconditioning in her cell.