Being in detention for more than a month now has allowed Senator Leila de Lima to reflect on herself.

In another hand written message dated April 7, De Lima talked about being true to herself and how she hates being told or coached what to say.

“Let me be me. That’s what I tell people close to me, including my staff. I want everything spontaneous. I like things to develop naturally,” she said.

“While I recognize its political value, I don’t go for orchestrated scenarios, e.g. “hakots” in rallies, rehearsed public pronouncements. I don’t ever want to impose on people.”

“I dislike being told or coached what to say and how to project myself before an audience. I say what I want to say and say it straight. I don’t go around the bush. I don’t patronize and pull people’s legs. I don’t have a politician’s tongue,” the senator said. 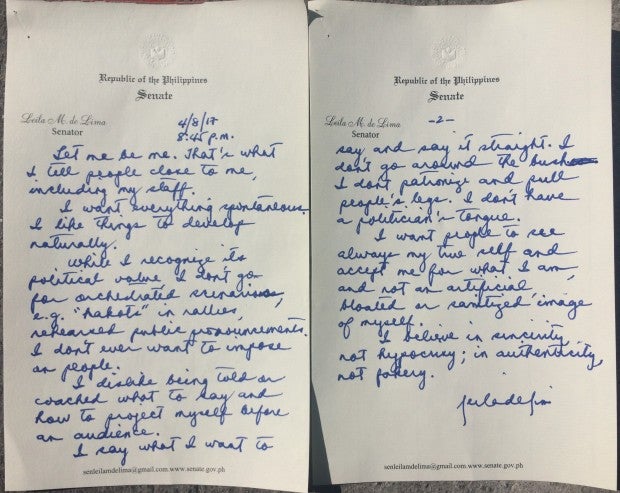 De Lima said she wants the people to see her true self and to accept her for what she is and “not an artificial, bloated or sanitized image of myself.”

“I believe in sincerity, not hypocrisy; in authenticity, not fakery,” said the senator, who has been detained at the Philippine National Police’s Custodial Center at Camp Crame over drug charges. She was arrested last February 24.

Her incarceration has also developed her love for cats.

“As some may know, I’m a dog lover. I have 13 dogs at home, of various breeds. Coco, a 6-yr.-old Japanese Spitz, the brightest and most sensitive of them all, is my favorite. He visits me once a week. And his every visit makes my day,” De Lima said in another note also dated April 7.

“When Coco is not here, my pets are stray cats, 6 stray cats. Except for one, they congregate in my quarters every night for dinner. I love feeding them,” she said

Of her new pets, however, De Lima said, one stood out and became her favorite. She named her favorite cat “Blackie” because of his color.

“Blackie is my favorite cat. Why? Because he’s different — a loner, an outcast, an underdog. I give him extra care. So, I’m also now a cat lover,” she said.

“More and more I’m convinced that this ‘detour’ in my life is not accidental or by chance, but by providence. It’s an unexpected blessing…” added the senator. CBB/rga