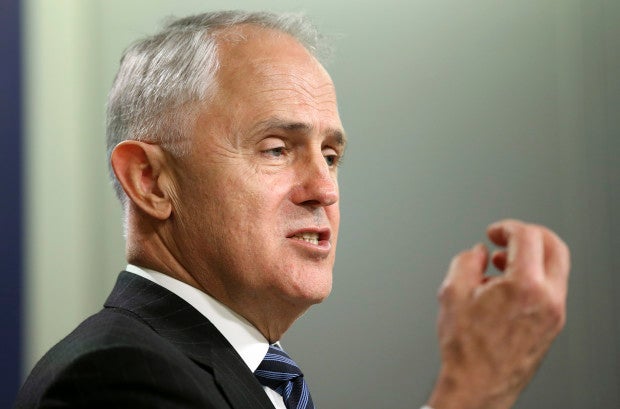 In this Aug. 10, 2016 photo, Australian Prime Minister Malcolm Turnbull addresses the media from the government offices in Sydney. Turnbull on Monday, May 1, 2017, warned North Korea after a Pyongyang official reportedly threatened a nuclear missile strike on Australia. AP FILE

BRISBANE, Australia — Australia’s prime minister used a commemoration of a World War II naval battle on Monday to warn that his country and the United States would not tolerate North Korea’s “reckless, dangerous threats” to regional peace.

READ: US show of force to North Korea also could show US weakness

Prime Minister Malcolm Turnbull spoke at a dawn service in the northeastern city of Townsville where Australians and Americans gathered to remember the pivotal Battle of Coral Sea, which was fought from May 4 to 8, 1942 in waters about 800 kilometers (500 miles) away.

U.S. aircraft carriers supported by Australian cruisers stopped a Japanese naval invasion of the Papua New Guinea capital Port Moresby that would have cut communications between Australia and the United States had the Japanese forces prevailed.

“Today Australia and the United States continue to work with our allies to address new security threats around the world,” Turnbull said.

“Together, we’re taking a strong message to North Korea that we will not tolerate reckless, dangerous threats to the peace and stability of our region and we are united in our efforts to defeat the terrorists in the Middle East and Afghanistan,” he added.

Turnbull will meet President Donald Trump for the first time on Thursday in New York aboard the WWII aircraft carrier USS Intrepid to commemorate the 75th anniversary of the start of the battle in which an American carrier was sunk and another American carrier plus two Japanese carriers were badly damaged.

Trump said in a taped interview broadcast Sunday on CBS’ “Face the Nation” that North Korea will eventually develop better missiles, and “we can’t allow it to happen.” CBB