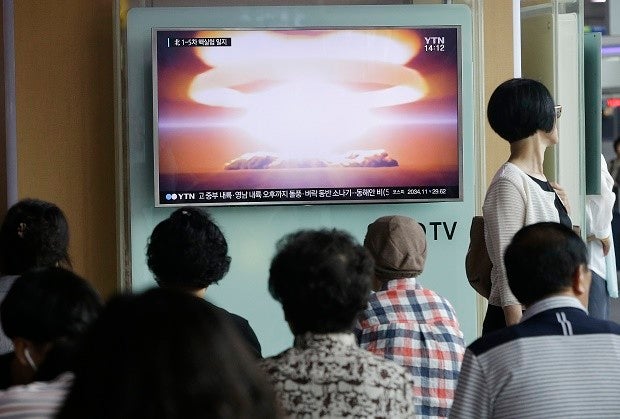 SEOUL — A top South Korean government official has called for strong support from the international community as North Korea edged closer to the final phase of its expanding missile and nuclear weapons program.

At the start of the World Journalists Conference here on Monday, Vice Foreign Minister Ahn Chong-ghee said the escalation of North Korea’s nuclear development at a “deeply troubling pace” presented a “very real danger” not only to neighboring countries but to the rest of the world.

“North Korea’s actions are not simply an imminent threat to Korea or this region. They present a very real danger to the entire globe,” Ahn told journalists from 60 countries.

Last year, Pyongyang carried out two nuclear tests and 24 ballistic missile launches. Four separate rounds of missile tests have already been conducted this year — the most recent on Tuesday, which fell into the Sea of Japan.

In 2012, it launched a long-range rocket that successfully put a satellite in orbit. Reports from neighboring countries said the rocket flew south over Okinawa, Japan with three parts falling off the Korean Peninsula and into the East China Sea and near Philippine waters.

“The coupling of such recklessness with weapons of mass destruction would be recipe for catastrophic disaster. It is precisely for this reason that North Korea now tops the list of global security concerns for the world,” said Ahn.

He also pointed out that North Korea’s status as a “nuclear weapons state” has been enshrined in its constitution and that it must receive stronger sanctions to change its behavior. Bringing back denuclearization on the dialogue table with Pyongyang was a priority issue, he added.

“Time is not on our side. We stand at the tipping point as North Korea is nearing the final stage of nuclear weaponization of its nuclear material,” said the official.

But amidst key foreign policy challenges it was facing, South Korea will remain strongly committed to free trade and will take an active role in discussions on promoting economic integration in the Asia Pacific at the bilateral level.

It will also seek to expand its network of Free Trade Agreements to Latin America, the Middle East and Africa, he said.

At the multilateral level, Seoul will continue to engage its partners at multilateral forums such as the Asia-Pacific Economic Cooperation (APEC), the G20 and the Asia-Europe Meeting (ASEM) to “help stem the tide of protectionism,” he said.  JE/rga