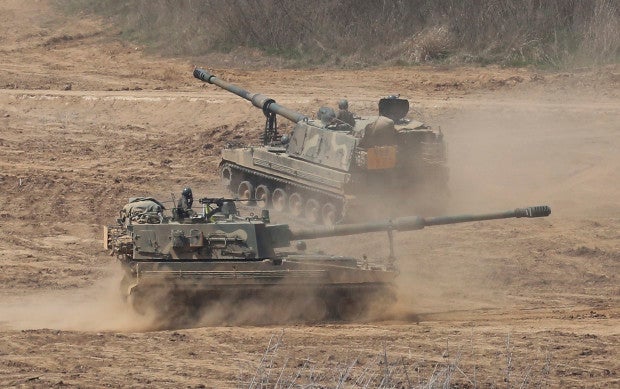 SEOUL, South Korea — President Donald Trump said in a television interview to be aired Sunday that he believes China’s president has been putting pressure on North Korea as it pursues its missile and nuclear weapons programs.

In an interview with CBS’ “Face the Nation,” Trump said he won’t be happy if North Korea conducts a nuclear test and that he believes Chinese President Xi Jinping won’t be happy, either.

On Saturday, a North Korean mid-range ballistic missile apparently failed shortly after launch, South Korea and the United States said, the third test-fire flop just this month but a clear message of defiance as a U.S. supercarrier conducts drills in nearby waters.

North Korean ballistic missile tests are banned by the United Nations because they’re seen as part of the North’s push for a nuclear-tipped missile that can hit the U.S. mainland. The latest test came as U.S. officials pivoted from a hard line to diplomacy at the U.N. in an effort to address what may be Washington’s most pressing foreign policy challenge.

North Korea didn’t immediately comment on the launch, though its state media on Saturday reiterated the country’s goal of being able to strike the continental U.S.

The timing of the North’s test was striking: Only hours earlier the U.N. Security Council held a ministerial meeting on Pyongyang’s escalating weapons program. North Korean officials boycotted the meeting, which was chaired by U.S. Secretary of State Rex Tillerson.

South Korea’s Joint Chiefs of Staff said in a statement that the missile flew for several minutes and reached a maximum height of 71 kilometers (44 miles) before it apparently failed.

It didn’t immediately provide an estimate on how far the missile flew, but a U.S. official, speaking on condition of anonymity to discuss sensitive matters, said it was likely a medium-range KN-17 ballistic missile. It broke up a few minutes after the launch.

Japan’s Chief Cabinet Secretary Yoshihide Suga, speaking after a meeting of Japan’s National Security Council, said the missile is believed to have traveled about 50 kilometers (30 miles) and fallen on an inland part of North Korea.

Analysts say the KN-17 is a new Scud-type missile developed by North Korea. The North fired the same type of missile April 16, just a day after a massive military parade where it showed off its expanding missile arsenal, but U.S. officials called that launch a failure.

Some analysts say a missile the North test fired April 5, which U.S. officials identified as a Scud variant, also might have been a KN-17. U.S. officials said that missile spun out of control and crashed into the sea.

Moon Seong Mook, a South Korean analyst and former military official, says that the North would gain valuable knowledge even from failed launches as it continues to improve its technologies for missiles. The South Korean and Japanese assessments about Saturday’s launch indicate that the North fired the missile from a higher-than-normal angle to prevent it from flying too far, he said.

“They could be testing a variety of things, such as the thrust of the rocket engine or the separation of stages,” Moon said. “A failure is a failure, but that doesn’t mean the launch was meaningless.”

The two earlier launches were conducted from an eastern coastal area, but Saturday’s missile was fired in the west, from an area near Pukchang, just north of the capital, Pyongyang.

South Korea’s Foreign Ministry denounced the launch as an “obvious” violation of United Nations resolutions and the latest display of North Korea’s “belligerence and recklessness.”

“We sternly warn that the North Korean government will continue to face a variety of strong punitive measures issued by the U.N. Security Council and others if it continues to reject denuclearization and play with fire in front of the world,” the ministry said.

Pope Francis warned that “a good part of humanity” will be destroyed if tensions with North Korea escalate, and he called for diplomacy and a revived United Nations to take the lead in negotiating a resolution.

Francis was asked as he traveled back to Rome from Egypt on Saturday local time (early Sunday morning Seoul time) about North Korean ballistic missile tests and U.S. warnings of “catastrophic” consequences if the world fails to stop them.

The North routinely test-fires a variety of ballistic missiles, despite U.N. prohibitions, as part of its weapons development. While shorter-range missiles are somewhat routine, there is strong outside worry about each longer-range North Korean ballistic test.

Saturday’s launch comes at a point of particularly high tension. Trump has sent a nuclear-powered submarine and the USS Carl Vinson aircraft supercarrier to Korean waters, and North Korea this week conducted large-scale, live-fire exercises on its eastern coast. The U.S. and South Korea also started installing a missile defense system that is supposed to be partially operational within days, while their two navies began joint military drills later Saturday.

The South Korean navy said the drills are aimed at “deterring North Korea’s provocations and displaying the firm alliance between the United States and South Korea.”

On Friday, the United States and China offered starkly different strategies for addressing North Korea’s escalating nuclear threat as Tillerson demanded full enforcement of economic sanctions on Pyongyang and urged new penalties. Stepping back from suggestions of U.S. military action, he even offered aid to North Korea if it ends its nuclear weapons program.

The range of Tillerson’s suggestions, which over a span of 24 hours also included restarting negotiations, reflected America’s failure to halt North Korea’s nuclear advances despite decades of U.S.-led sanctions, military threats and stop-and-go rounds of diplomatic engagement. As the North approaches the capability to hit the U.S. mainland with a nuclear-tipped missile, the Trump administration feels it is running out of time.

Chairing a ministerial meeting of the U.N. Security Council on Friday, Tillerson declared that “failing to act now on the most pressing security issue in the world may bring catastrophic consequences.”

His ideas included a ban on North Korean coal imports and preventing its overseas guest laborers, a critical source of government revenue, from sending money home. And he warned of unilateral U.S. moves against international firms conducting banned business with Pyongyang’s nuclear and missile programs, which could ensnare banks in China, the North’s primary trade partner.

Yet illustrating the international gulf over how best to tackle North Korea, several foreign ministers on the 15-member council expressed fears of a conflict on the Korean Peninsula, which was divided between the American-backed South and communist North even before the 1950-53 Korean War. The conflict ended with no formal peace treaty. And while danger always has lurked, tensions have escalated dramatically as the North’s young leader, Kim Jong Un, has expanded a nuclear arsenal his government says is needed to avert a U.S. invasion.

No voice at Friday’s session was more important than that of China, a conduit for 90 percent of North Korea’s commerce and a country Trump is pinning hopes on for a peaceful resolution to the nuclear crisis. Trump, who recently hosted President Xi Jinping for a Florida summit, has sometimes praised the Chinese leader for a newfound cooperation to crack down on North Korea and sometimes threatened a go-it-alone U.S. approach if Xi fails to deliver.

Foreign Minister Wang Yi said China would adhere to past U.N. resolutions and wants a denuclearized peninsula. But he spelled out no further punitive steps his government might consider, despite Tillerson’s assertions in an interview hours ahead of the council meeting that Beijing would impose sanctions of its own if North Korea conducts another nuclear test.

Wang put forward a familiar Chinese idea to ease tensions: North Korea suspending its nuclear and missile activities if the U.S. and South Korea stop military exercises in the region. Washington and Seoul reject the idea.

Tillerson said the U.S. does not seek regime change in North Korea, and he signaled American openness to holding direct negotiations with Pyongyang. The U.S. also could resume aid to North Korea once it “begins to dismantle its nuclear weapons and missile technology programs,” he said. Since 1995, he added, Washington has provided more than $1.3 billion to the impoverished country.

But the prospects for any more U.S. money going there appeared bleak. Even negotiations don’t seem likely.

Tillerson said the North must take “concrete steps” to reduce its weapons threat before talks could occur. Six-nation nuclear negotiations with North Korea stalled in 2009. The Obama administration sought to resurrect them in 2012, but a deal to provide food aid in exchange for a nuclear freeze soon collapsed.

“In a nutshell, (North Korea) has already declared not to attend any type of talks which would discuss its nuclear abandonment, nuclear disbandment,” Kim In Ryong, North Korea’s deputy U.N. ambassador, told The Associated Press. His government declined to attend Friday’s council meeting. CBB/rga