‘Bato’ pulls out as beauty pageant judge on Duterte’s order 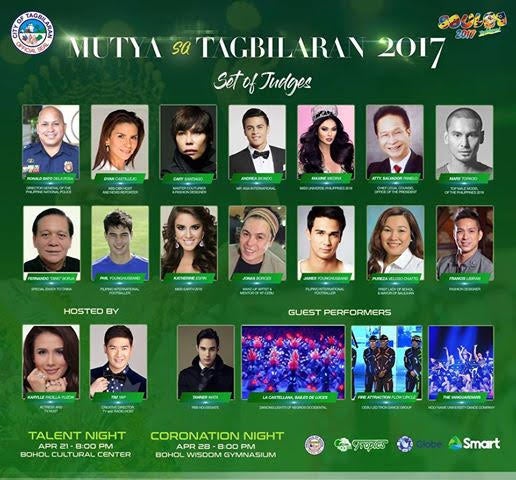 A poster promoting the holding of the Mutya ng Tagbilaran on Apr. 28, 2017, shows PNP Director General Ronald “Bato” Dela Rosa as one of the judges. Dela Rosa pulled out as a judge on the orders of President Duterte due to the holding of the Asean Summit. (PHOTO BY LEO UDTOHAN / INQUIRER VISAYAS)

Dela Rosa sent word to Senior Supt. Felipe Natividad, Bohol police director, that he could not attend the pageant on orders of his boss, President Rodrigo Duterte.

“He was told by the President not to attend (the pageant) so he can focus on the (security preparations of the) Asean (Association of Southeast Asian Nations) Summit,” said Tagbilaran City administrator Leonides Borja.

Ten Asean leaders are expected to join summit meetings that will be held at the Philippine International Convention Center in Pasay City from April 26 to 29.

At least 4,000 police and military personnel are deployed to secure the heads of states, delegates, foreign guests and meeting venues.

Borja said Natividad informed him and Tagbilaran City Mayor John Geesnell Yap on Thursday morning that Dela Rosa cancelled his visit to Tagbilaran and would no longer sit as a judge of the Mutya ng Tagbilaran where 15 ladies would be vying for the title.

The pageant will be hosted by actress-singer Karylle Padilla-Yuzon and television host Tim Yap. The Mutya ng Tagbilaran is one of the highlights of this year’s feast of St. Joseph, the city’s patron saint, on May 1.  SFM/rga