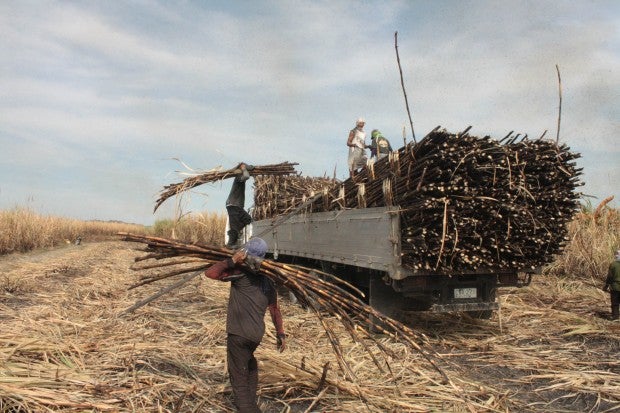 Life in Hacienda Luisita in Tarlac is backbreaking for farm workers. Their lives are expected to change, depending on how they are going to use the parcels of the sugar estate that they would get under the government’s agrarian reform program.
INQUIRER FILE / REYMOND T. OREJAS

CITY OF SAN FERNANDO — As many as 700 members of the militant Kilusang Magbubukid ng Pilipinas (KMP) gathered at the Barangay (village) Balete side of Hacienda Luisita in Tarlac province on Monday (April 24), intending to “occupy” and cultivate some 900 hectares of land.

The mass action was announced by KMP in a statement and was apparently timed with the Supreme Court’s 2012 decision ordering the Department of Agrarian Reform to give 4,500 hectares of land to over 6200 farmworkers in the sugar estate of the Cojuangco family, the clan of former presidents Corazon Aquino and her son, Benigno Aquino III. The agency complied with the order through a tambiolo system where DAR randomly picked out the lots allocated for each beneficiary.

The lands now being targeted for occupation are under the control of the Rizal Commercial Banking Corp and an industrial estate. These firms have deployed security guards to the properties sold by the Cojuangco family.

The first group of farmers numbering 400 arrived on Sunday night (April 23) and slept at a local gymnasium, and grew to 700 by Monday morning, said Balete village chairman Edison Diaz. CBB/rga