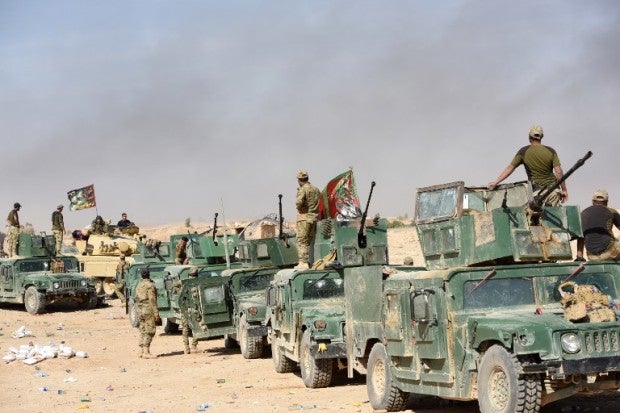 Members of Iraqi pro-government forces hold a position on the frontline on October 21, 2016, near the village of Tall al-Tibah, some 30 kilometers south of Mosul, during an operation to retake the main hub city from the Islamic State (ISIS) group jihadists. ISIS terrorists ambushed a convoy of Iraqi security forces, killing 10, officials said. AFP

HABBANIYAH, Iraq — An ambush by the Islamic State of Iraq and Syria (ISIS) group killed 10 members of the security forces Sunday in western Iraq, where federal and other forces recently ramped up an anti-jihadist offensive.

A local commander said the attackers were disguised as military and took advantage of a sandstorm to ambush a convoy near the town of Rutba, a remote outpost on the road to Jordan.

“They killed at least 10 and wounded 20,” he told AFP. Other officials confirmed the attack and the casualty toll.

Rutba lies about 390 kilometers (240 miles) west of Baghdad in the vast province of Anbar and is the last sizeable town before the border with Jordan.

Anbar is a sprawling desert province traversed by the Euphrates and borders Syria, Jordan and Saudi Arabia.

It has long been an insurgent stronghold, and IS already controlled parts of it when it swept through Iraq in 2014 to take over around a third of the country.

Pro-government forces have since retaken most towns and cities in Anbar, but the jihadists still control some areas near the Syrian border and have desert hideouts from which they harass federal forces.

The army officer said the victims of the attack were members of the border guard, Anbar police and the army.

“The Daesh members were wearing military uniforms and driving military vehicles. They set up a rogue checkpoint on the main road near Rutba,” a border guard commander said.

He said five of the 10 killed in the ambush were border guards.

According to the mayor of Rutba, Imad al-Dulaimi, the ambush was carried out at around 6:00 pm (1500 GMT) in an area just east of Rutba on the main road from the provincial capital Ramadi.

He added that three more members of the security forces were missing and feared kidnapped.

Government forces have over the past six months focused their efforts on retaking Mosul, the large northern city which was the de facto Iraqi capital of IS’s self-proclaimed “caliphate”.

But with the help of tribal fighters and forces from the US-led coalition, they have simultaneously pressed an offensive pushing out from Haditha, a city in western Anbar which the jihadists never took.

According to Iraqi military sources, new contingents of US special forces were recently flown to the nearby Al-Asad airbase to support the latest push in western Anbar.

The goal of the offensive is to retake the border town of Al-Qaim, which is still controlled by IS, and other nearby areas along the Euphrates which were once safe havens for top jihadist leaders.

According to unconfirmed reports, jihadist supremo Abu Bakr al-Baghdadi himself was recently spotted in the area. CBB