Slain Abu Sayyaf to be buried in Bohol 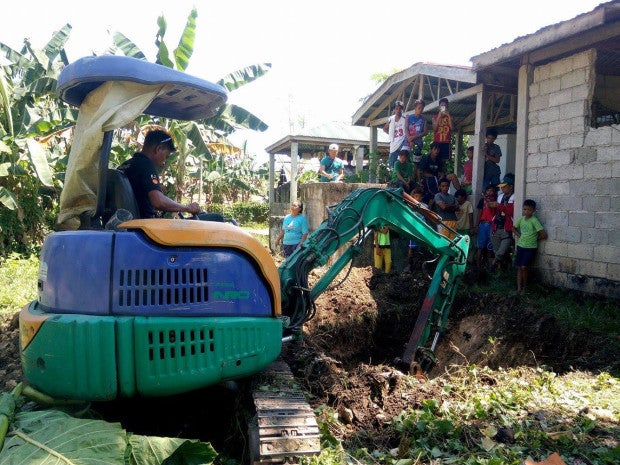 A soldier mans a backhoe to dig a gravesite at the public cemetery for the three Abu Sayyaf members killed during the clash with government troops in Clarin town, Bohol, on Saturday. INQUIRER VISAYAS / LEO UDTOHAN

CLARIN, Bohol — The three Abu Sayyaf members killed during an ongoing clash in this 5th class municipality will be buried at a public cemetery here.

But the remains of Joselito Melloria will be claimed by their relatives in Barangay Napo, Inabanga town, an adjacent town.

The four were killed during  pursuit operations that started past noon on Sunday when authorities were tipped off of their presence in Barangay Bacani, Clarin.

READ: Abu Sayyaf deaths up to 3 in new Bohol battle with gov’t troops

Melloria was first killed past 3 p.m. while the three others fell in the evening.

As of 10 a.m. on Sunday, a backhoe had been digging a gravesite for the three bodies so these would be buried in keeping with Islamic laws that the body should be buried within 24 hours from the time of death.

“We are still verifying their identities,” he added. CBB/rga