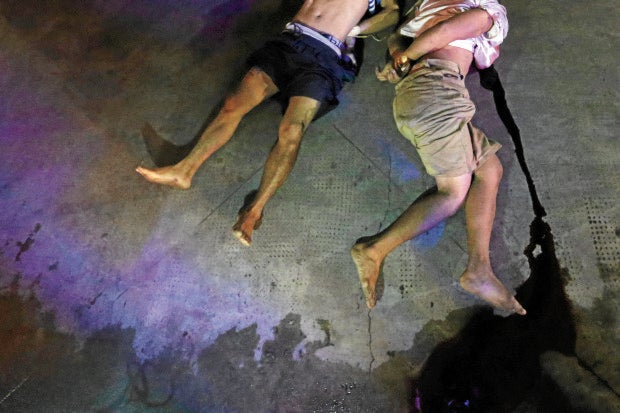 A retired intelligence officer and an active senior commander of the Philippine National Police (PNP) are saying that most of the killings in the Duterte administration’s war on drugs are done by policemen and not by vigilantes, a special report by Reuters news agency said.

The report, written by Manuel Mogato and Clare Baldwin and released on Tuesday, cited the accounts of the two officers who said policemen were paid cash to kill drug suspects and plant evidence in crime scenes.

While Reuters called the accounts as “most detailed,” it said they were “unable to verify independently” the claims of the two officers, who spoke on condition that they would not be identified.

READ: We have no fear, says hit man in drug war

“It is the Philippine National Police doing it. This killing machine must be buried six feet under the ground,” the retired intelligence officer was quoted as saying.

The active commander, meanwhile, revealed that police were coordinating with local officials to unplug security cameras and switch off street lamps during their well-planned “buy-busts” executions of targets drawn from a list of drug suspects. He said the team of PNP operatives would plant guns and drugs at the crime scene after killing the target.

Reuters added that, according to the commander, most drug suspects in his precinct were executed by rookie cops who “are either eager for the experience or nominated by their superiors” as “baptism by fire.”

“There is no such thing as a legitimate buy-bust … The dealers know the cops and won’t sell to them,” the commander was quoted as saying.

Police doing buy busts usually do not do it themselves but use civilian “assets” or informants.

“We have to plant evidence for the legality of the operation. We are ordered to do these operations, so we have to protect ourselves,” he added.

In planting the evidence, the commander said police officers were told by PNP crime scene investigators last year to “place the guns at a slight distance from the suspects, rather than in their hands, to make things more realistic.”

Police usually put the firearm in the victim’s hand and pull the trigger using his finger so the forensic test would show that it was the suspect who fired the gun.

Reuters also cited the retired intelligence officer’s unpublished 26-page report on the drug war titled “The State-Sponsored Extrajudicial Killings in the Philippines,” which the news agency said had been shared with Catholic Church leaders and the Commission on Human Rights.

According to the report, which the retired officer said was based on the accounts of 17 policemen, police are paid P10,000 a head to kill not only drug suspects but also “rapists, pickpockets, swindlers, gang members, and alcoholics,” among other “troublemakers.” It added that members of the infamous Davao Death Squad (DDS) were “drafted to augment and assist” the nationwide crackdown on narcotics.

Cash reward for killing drug suspects range from P20,000 for “street level pusher and user,” to P50,000 for a “member of a neighborhood council,” P1 million for “distributors, retailers and wholesalers,” and P5 million for “drug lords.”

The PNP boasts of a large number of drug users and pushers who surrendered to authorities as a sign of the drug war’s success, but the commander interviewed by Reuters said the police were given a quota of “surrenderers” and force arrested “drunk or shirtless men” to register as drug suspects.

While calling the senior officers’ accounts as the “most detailed insider accounts yet of the drug war’s secret mechanics,” Reuters said they were unable to verify independently if the PNP was indeed behind vigilante killings in the country. But it noted that many of the retired intelligence officer’s findings supported previous investigations done by Reuters and human rights organizations.

An official of the Commission on Human Rights has said that it has not found proof to conclude that extrajudicial killings were state-sponsored or not.

About 9,000 deaths have been linked to the war on drugs since President Duterte took office on June 30, Reuters said. Police Director General Ronald “Bato” dela Rosa has criticized claims that link all the killings to the war on drugs, saying many have been found to be unrelated to the antidrug drive.

Based on PNP’s latest data on its relaunched antidrug campaign dubbed as “Project Double Barrel Reloaded,” 131 drug suspects were killed while 9,692 persons were arrested from March 1 to April 16.

A recent Social Weather Stations (SWS) survey showed that fewer Filipinos were satisfied with the performance of the government in its war on drugs, with 3 in 4 Filipinos expressing worry that they or someone they know would fall victim to extrajudicial killings. CBB