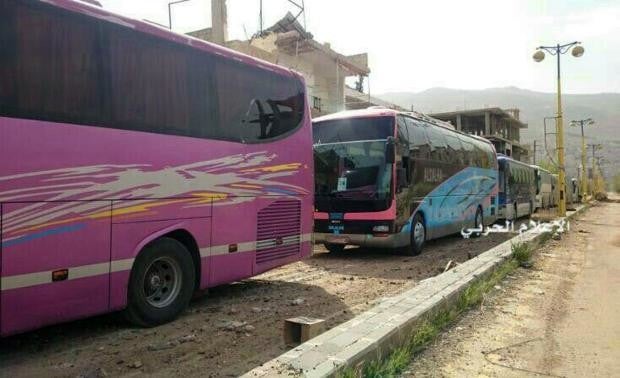 This photo provided by the government-controlled Syrian Central Military Media, shows buses gathered before a planned evacuation of residents in Madaya and Zabadani, two opposition-held areas near Damascus, Syria, Wednesday, April.12, 2017. As part of the planned evacuation deal of the besieged areas in different parts of the country, Syria’s government and rebels exchanged some 30 prisoners and nine bodies, activists and officials said Wednesday. (Photo from the Syrian Central Military Media via AP)

BEIRUT — Thousands of Syrians evacuated from their besieged towns have spent the night on buses at an exchange point as a much criticized population transfer deal stalls, activists and residents said Saturday.

Syrian state TV blamed the rebels for obstructing the deal, causing thousands of evacuees to be stuck in bus depots overnight. Syrian Red Crescent teams distributed meals for the restless evacuees, who had left their homes over 30 hours earlier.

Dozens of buses carrying thousands children, women and men from pro-government areas Foua and Kfraya, and from opposition towns Madaya and Zabadani were parked at separate parts of the edge of Aleppo city, separated by walls, Syrian TV showed.

“The people are restless and the situation is disastrous,” said Ahmed Afandar, a resident evacuated from his hometown near Madaya. “All these thousands of people are stuck in less than half a kilometer.” He said the area was walled off from all sides and there were no restrooms.

“We are not moving forward or backward,” he said. The evacuees from Madaya were expected to head to rebel-held Idlib, west of Aleppo. Afandar said people were not allowed to leave the buses for a while before they were let out. Food was distributed after several hours and by early afternoon the evacuees from rebel-held areas were “pressured” to sit back on their buses, Afandar said.

Salloum Salloum, a lawmaker speaking on the pro-government al-Ikhbariya TV channel, said efforts are underway to resolve the problem, accusing the rebels of adding new conditions to the deal.

Rami Abdurrahman, head of the Britain-based Syrian Observatory for Human Rights, says the Syrian government and rebels who negotiated the deal have disagreed over the terms for the evacuation of gunmen from the towns.

An opposition representative, Ali Diab, told the pan-Arab Al-Arabiya TV that fewer armed men than agreed to were evacuated from the pro-government areas, violating the terms of the agreement.

A resident of Zabadani — another rebel-held town to be evacuated — Amer Burhan says no evacuation has taken place from there.

Also Saturday, an Iraqi military statement said the Syrian air force has carried out a series of airstrikes against Islamic State group militants inside Syria, with one killing a leading member of the group in Raqqa, the IS de facto capital.

The statement said the strikes were against IS positions in Raqqa and Deir el-Zour, and near the Iraqi border. The statement described the targets as “the biggest positions for senior terrorists.”

The statement said Abu Bakir al-Habeeb al-Hakim was killed in one of the strikes, describing him as a leading member of IS in Raqqa. It said he was a militant with al-Qaida-linked groups before joining IS. It was not immediately clear if al-Hakim was the same French national U.S. officials said was killed in an airstrike in Syria in November 2016.

Another strike hit a gathering of suicide attackers who were planning to enter Iraq, according to the statement.

At the time, the U.S. officials said al-Hakim was believed to be linked to the 2015 attacks at the French satirical newspaper Charlie Hebdo, mentoring the brothers who gunned down the cartoonists at the French paper in 2015.

Another strike hit a gathering of suicide attackers who were planning to enter Iraq, according to the statement.