MANILA, Philippines—The crime was described as “the rape of the ocean.”

Poachers decimated an entire “reef complex”—almost twice as big as Manila—off the coast of Cotabato province when they harvested more than 21,000 pieces of black coral and killed 161 endangered turtles and other marine life, officials said Tuesday.

“The Moro Gulf and the Sulu Sea off Cotabato are supposed to be unexplored reef areas but with this collection, we can see that they have also been disturbed,” said Ludivina Labe, a senior marine biologist of the Bureau of Fisheries and Aquatic Resources (BFAR).

“It’s like a forest that has been cut down,” Labe said. “One reef complex was decimated.”

Labe spoke with reporters during the turnover of the seized black corals, dead sea turtles and 7,300 pieces of sea shells to officials of BFAR and the Department of Environment and Natural Resources at the port of Manila. 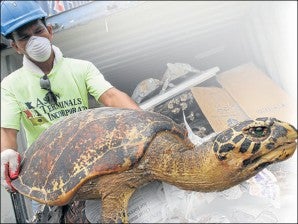 Customs Police Director Nestorio Gualberto said wildlife trader Exequiel Navarro, consignee of the contraband, appeared at his office on Tuesday and indicated that he was prepared to identify the financier of the project and the people who harvested the corals.

Gualberto said the contraband was concealed in two container vans and declared as rubber.

Only two or three colonies of black corals—each represented by a piece of black coral—are found in one hectare of sea bed, Labe explained.

With 21,169 black coral pieces recovered, this could mean that the area harvested could be as big as 7,000 hectares, or an area almost twice the size of the city of Manila.

“These web-like colonial organisms are not lush or bushy. They’re found on reef walls or reef slopes. One piece is equal to one colony,” Labe said.

“One piece of black coral is not just one organism. There are thousands of other organisms who live there,” she added.

Theresa Mundita Lim, director of the DENR-Protected Areas and Wildlife Bureau, said one of the turtles killed measured 40 inches and was aged “80 to 100 years old.”

“There were also small ones who were only juveniles or just 4 years old,” Lim said.

“This is saddening because we have reduced this illegal trade and now we catch something as big as this,” she added.

Environment officials said some of the contraband could be given to marine biology schools while the black coral, although already dead, could be returned later to the sea.

The World Wildlife Fund estimates that the “economic cost over a 25-year period of destroying one kilometer of coral reef is somewhere” between $137,000 and $1,200,000.

“It took 25 years or even more for these corals to grow like this. They grow only one centimeter a month,” Labe said.

The Convention on the International Trade in Endangered Species of Wild Fauna and Flora has banned the harvesting of black coral but the practice continues.

“(The illicit trade) is being fueled by the demand of the multibillion-dollar marine ornamental industry for exotic decorative species and the increasing popularity of coral-accented jewelry and fashion accessories,” Alvarez said.

“While the Bureau of Customs does not have the means to serve as a first line of defense against the so-called plunderers of the marine ecosystem, we are determined to play the role of a deterrent by making it unprofitable for illegal wildlife traders to move their prohibited cargoes through our air and sea ports,” he said.

“Nobody should profit from the rape of the ocean,” Alvarez added.

The Fisheries Code of 1998, which bans gathering and selling corals, punishes violators with imprisonment from six months to two years and a fine from P2,000 to P20,000.