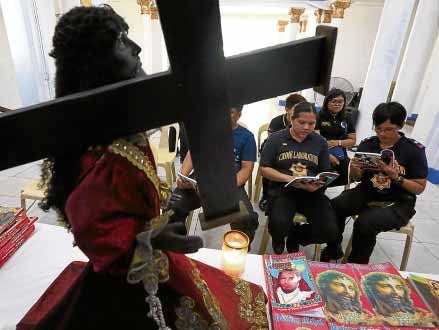 While popular tunes are proposed for Holy Week’s Pabasa, there is a need to check for anti-Semitic content, which can be found in the lines of the Pasyon that continue to blame the Jews for the death of Jesus.

Pabasa ng Pasyon, or Pabasa, is the public chanting of the birth, life, passion, death and resurrection of Jesus. It is a poem in stanzas of five lines of eight syllables.

It is traditionally chanted or sung a cappella in a mellow, slow and monotonous tone that reminds one of the haunting lamentations for a dead loved one and dates back to the 17th century when the Philippines was still a colony of Spain.

The anti-Semitic content has biblical and historical roots, according to David.

He said Pasyon relied mainly on the basic story line of the passion narrative according to John but “rewritten with Pinoy embellishments.”

In the passion story of the Gospel of John (which is read on Good Friday every year), those who persecuted Jesus and turned him over to the Romans for execution were simply lumped together as “the Jews” as if Jesus and his disciples were not Jewish.

“This is of course unfair, knowing that it was really a specific group of people that persecuted Jesus—mainly the priestly class that felt threatened by Jesus’ prophetic influence,” David said.

He added: “The onset of such anti-Semitic tendencies in the fourth Gospel has a very obvious historical background—namely, the persecution of the early Jewish converts to Christianity, which led to their eventual expulsion from the Jewish synagogues and their condemnation as ‘heretics.’”

“This painful experience of exclusion from the synagogue eventually led to a parting of ways between Christianity and Judaism, in spite of the fact that Christianity began mainly as a sectarian movement within Judaism.”

David said the anti-Semitic overtones in John were further reinforced by the Spanish Christian bias toward Spanish Jews. “This cultural baggage was brought to the Philippines by the Spaniards and passed on to our ancestors through Pabasa.”

The Vatican II document, “Nostra Aetate” (In Our Time), by Pope Paul VI, which introduced reforms in Church policies, including the interactions with non-Christians like Jews and Muslims, has repudiated the centuries-old charge of “deicide” (the killing of God) against the Jews.

It stated that while the Jewish authorities and their followers pressed for the crucifixion of Jesus, his death “cannot be charged against all the Jews, without distinction, then alive, nor against the Jews of today.”

In her short essay “Who Killed Jesus?,” Sr. Maureena Fritz, a cofounder of Bat Kol Institute in Jerusalem, studied the historical situation at the time of the story of the Passion of Christ and the time the Gospels were written. (Bat Kol Institute was formed as a response to Nostra Aetate).

Fritz noted that Jerusalem was under Roman rule and the office of the high priest in the temple became a political tool in the hands of the Romans.

She said Annas, Caiaphas and the priests “came to be little more than religious functionaries of the Roman administration” and that “these men do not represent the Jewish people.”

So who killed Jesus?

In summary, Fritz said: “The two guilty partners are, first, the Romans did the dirty job; crucifixion was a Roman punishment, not a Jewish one. Second, the priests, the leaders of the religious establishment, functionaries of Rome, charged with keeping the peace.”

She added that Jesus did create a disturbance near the temple when he drove out all who were selling and buying there, and overturned the tables of the moneychangers and the seats of those who sold doves (Mt 21:12).

Caiaphas, who sent Jesus to his death, summed up his ultimate purpose in the principle that the whole nation was more important than a single individual.

With Nostra Aetate, the Vatican has moved for reconciliation between Christians and Jews. The document acknowledges past judgmental errors in portraying and teaching that the Jewish people had forfeited their place as children of God by rejecting Jesus as the Messiah. It reminds the Christian world that Jesus, Mary his mother and all the disciples were Jews.

Using contemporary tunes to chant the Pasyon  has been proposed as a way to attract more people, especially the young to join Pabasa.

But  with  uncorrected anti-Semitic content, it will be just perpetuating errors, which the Church in the past 50 years  has tried to correct through Nostra Aetate.