LOS BAÑOS, LAGUNA—With only a little over an hour spent on the road, Lenten pilgrims can explore the heritage churches of Laguna province for the traditional “visita iglesia” (church visit) today.

Laguna has 86 Catholic churches, 26 of these built between the 16th and 19th centuries. The churches give pilgrims glimpses of the Catholic faith’s beginnings and its role in the spiritual and cultural development of Laguna.

Jerry Gaela, 51, a parish priest administering St. Paul the First Hermit Cathedral in San Pablo City, said that while visita iglesia was not a required practice among Catholics, it was “additional devotion for personal and spiritual growth.”

Visita iglesia is traditionally done on the night of Maundy Thursday when the Blessed Sacrament is displayed in the churches.

People used to visit seven churches, but now, they would go to as many as 14 churches and pray at the Stations of the Cross.

The spirit is “to accompany the Lord in his Passion,” Gaela said.

These are seven of Laguna’s heritage churches worth a visit today. 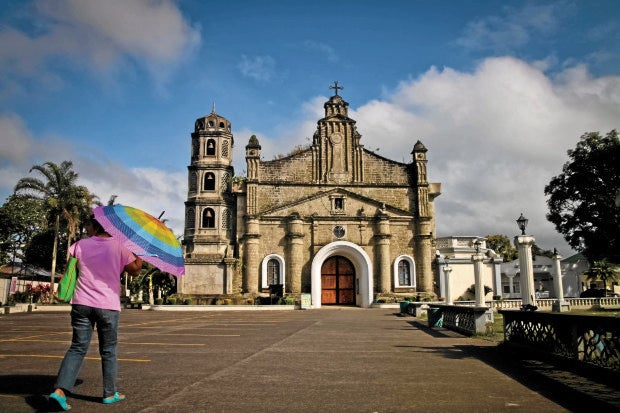 Our Lady of the Pillar Church, Alaminos town —KIMMY BARAOIDAN

Our Lady of the Pillar Church, Alaminos town

Founded in 1815, its original patron saint was Joachim, the father of the Blessed Virgin Mary, but was replaced with Our Lady of the Pillar, whose image was found in a well at Alaminos, said Jerome Cayton Barradas, the church’s social communication coordinator.

An image of Joachim is carved on the church’s wooden doors while his 200-year-old statue remains on the church’s facade. Alaminos is 70 kilometers south of Metro Manila. 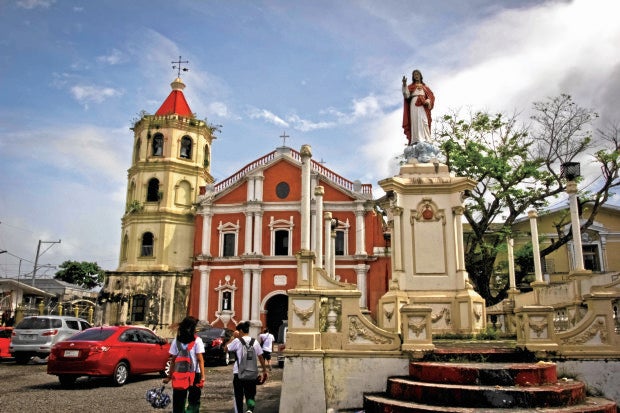 This is the “mother church” of all Catholic churches and chapels in Laguna province. The cathedral, about 10 km from Alaminos, started in 1586 as a chapel with thatched roof. It is the only parish church in the world that has Paul the First Hermit as its patron saint, according to Gaela.

In 1967, upon the creation of the Diocese of San Pablo, the church was elevated to a cathedral and became the seat of the diocese.

Gaela said the diocese was established in San Pablo because of its strategic location as the center of Calabarzon region. “And during the American era, this was the most progressive city [in the region]. The big population of Catholics … was also significant,” he added.

It was in 1752 when the second church was built from stone and brick. However, the structure was damaged by a fire in 1781.

A choir loft was added when the church was rebuilt in 1845 by Rev. Vicente Velloc, who also built the nearby Nagcarlan underground cemetery. 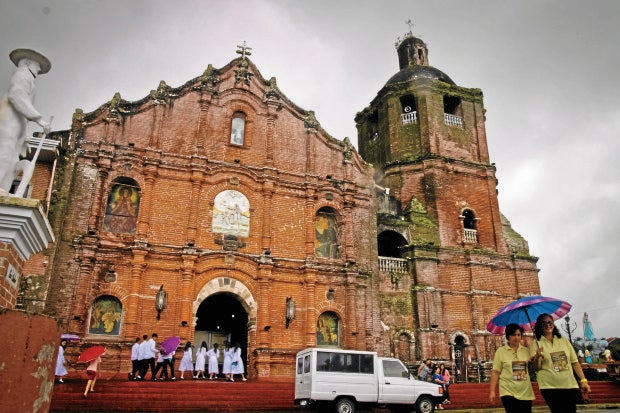 Only about 3 km from Nagcarlan, the church was established in the 1570s as an annex when Liliw town was still part of Nagcarlan. Liliw became an independent parish in 1605.

Fray Juan de Plasencia, a Franciscan friar and author of “Doctrina Cristiana” (Christian Doctrine), the first book printed in the Philippines, was buried in this church in 1590.

The baroque church, with its façade made of red bricks, was damaged during an earthquake in 1880. It was soon rebuilt but was damaged by fire in 1898. 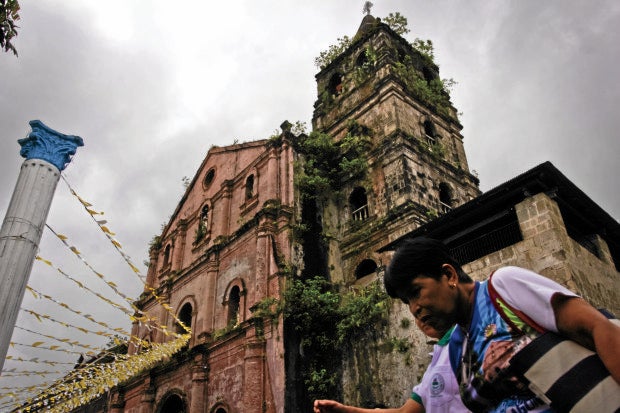 Around 6 km from Liliw, the church is one of Laguna’s oldest churches. Founded in 1571 by Augustinian missionaries, the church was first made of bamboo and palm leaves. The stone structure was later erected in 1616.

The church was hit by three fires and was damaged by a typhoon. This served as an American post during the Philippine-American War from 1899 to 1902.

San Gregorio Magno Parish Church is the only church in Laguna designated as a National Cultural Treasure.

Our Lady of the Holy Rosary, Luisiana town

The cross-shaped Nuestra Señora del Rosario Parish Church was established in 1854, the same year Luisiana was declared a municipality separate from its mother town of Majayjay, some 11 km away.

Historical documents showed the church was burned in 1872. The construction of a stone edifice started in 1873. Its transept (an area that forms the arms of the cross) was built from 1878 to 1881.

The last stop is the Santa Maria Magdalena Parish Church, about 20 km from Luisiana.

Construction of the Santa Maria Magdalena Parish Church began in 1829. The sand and stone used to build the baroque church was hauled by Magdalena residents from a nearby river. Construction took 16 years.

The church’s historical records showed that in February 1898, General Emilio Jacinto was wounded in a battle against the Spaniards at Maimpis River and sought shelter in the church. At a corner by a stairway, a glass enclosure protects an area where Jacinto’s bloodstains can be found.

Some scenes in the 2015 film, “Heneral Luna,” were shot in this church.

From Magdalena, visitors can make their way back to Metro Manila by passing through the towns of Pagsanjan, Sta. Cruz, Pila, Victoria, Bay, Los Baños and Calamba City before reaching South Luzon Expressway.